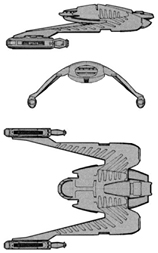 NOTES:
In late 2277, Star Fleet Intelligence received word that the Klingons were introducing a new class of small, warp-capable combat vessel for system defense, customs interdiction and courier duty. Known as Qongbogh, of “the Wolves”, the new Klingon corvette quickly spread throughout the Empire and became a familiar site to those freighter captains permitted to operate near or within Klingon territory.

The propulsion system of the K-41 were considered powerful for both the A and B models, which were launched simultaneously. The KWA-2 and KWB-2 drives were capable of maintaining excellent speed, allowing the corvettes to respond quickly to any potential interdiction requiprements near established ports. Both variants sported the KIB-1 impulse drive, which was well established as a rugged engine. The A and B models both used the KPD-2 pulse disruptor systems as well as being equipped with twin torpedo launchers. The A model was equipped with two KP-1, some of the oldest torpedo technology in the Empire. The B model was fitted with the more powerful KP-5, which had become the go-to medium torpedo of the day. These weapon combinations proved more than sufficient to intimidate most civilian ships and more than a few raiders, escpedially as the K-41s were rarely deployed in anything less than a three ship squadron. Field commanders quickly became adept at using swarming tactics when engaging larger foes. For boarding actions, a fully equipped squad of Imperail Marines were billeted onboard.

By 2280, a number of K-41’s had been spotted in open, or “free space” sectors such as the Triangle, suggesting that the Klingons may have been selling them to favored clients. However, only a handful sold to the OFMA were ever confirmed by Star Fleet.