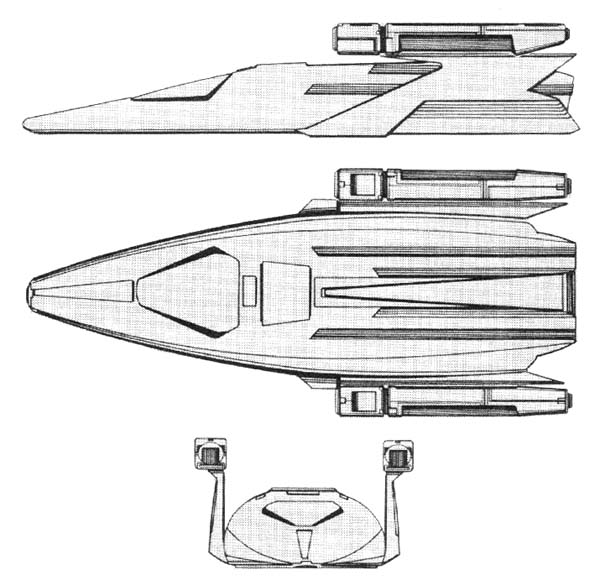 NOTES:
These Klingon vessels were traded to the Romulans beginning Stardate 2/1409, largely because of pressure on the Klingons to replace the structurally-weak N-8 (Klingon K-3) vessels. The P-12s also were altered to mount Romulan engines, weapons systems, and shields, but the modifications actually made the ships more structurally sound, probably because of the added support required for the tandem warp engines.

As of 2/2308, only one type was believed to be in service. It obviously had proven effective in its gunboat/systems patrol role, and it was being used along Federation borders and those of the Triangle. Of the 220 acquired in the exchange, about 200 were believed to be in active service at that time. Six had been been seen in the Triangle operating in the civil sector.

Some time after 2/2308, the Empire too the extraordinary action of reducing the initial equipment design of the P-12. Field engineers and support personnel all indicated that the computer an main warp drive were overpowered and unnecessarily difficult to maintain for a ship of this size and mission scope. The Type-2 incorporated the R-2m, which was easier to repair after combat and yet was sufficient to power the weapons and main drive. The Type-2 also removed the aft beam weapons, replacing them with a forward firing photon torpedo system. This nearly doubled the overall firepower of the small vessel.

The class is said to have been named for the famous Praetor Comilius, who, after suffering several serious defeats at the hands of his enemies, withdrew to his capital city to hold out for six years against the massive armies that each had assembled. He negotiated an alliance with one of his adversaries and broke the siege, later conquered his remaining enemies, and brought peace to his people that lasted a century.