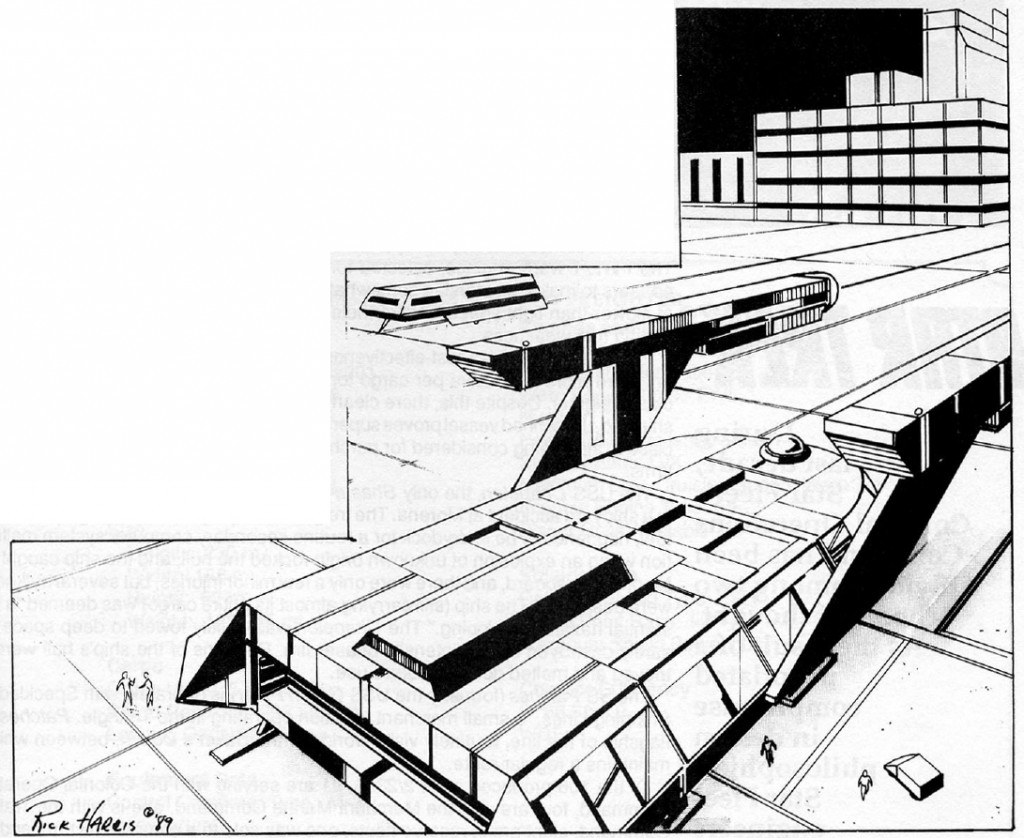 NOTES:
The Charles class commercial transport, first entering service in 2271, is the first starship created and manufactured by Stratford Starbuilders, Ltd. In the past, this fledgling firm had been known for slight, if unspectacular, growth and success in producing small quantities of shuttlecraft for commercial service. Stratford, now having entered into the interstellar shipbuilding market, has done so with a most unusual ves­sel.

Upon first examination, the most outstanding physical characteristic of the Charles is in the location of its warp propulsion units, which are actually forward of the main hull. This has led some harsh critics to call the starship a “backender” because when it is in transit, it appears from a distance to be moving in reverse.
As a transport, the Charles possesses several strengths and weaknesses. Unlike most starships intended as cargo-carriers, the Charles was designed around its offensive and de­fensive systems and ample computer capacity; a binary shield transducer and shipboard laser were design parameters. In fact, the shielding is among the best found on any commercial vessel of any size anywhere. Overall, the build­ers sought an efficiency balance be­tween equipment mass and super­structure limitations. This incidentally led to a high unit cost due mostly to the design requirements themselves.

Ironically, cost was never a considera­tion-except in the single area of crew comfort, which is sorely lacking and often described as “cramped.” The relatively high ship price, combined with interior furnishings and life-support systems that could be charitably called “spartan,” have proven to be a major marketing drawback for mass production. Even so, the vessel is a solidly-constructed, well protected, and functional (if odd-looking) design. Another positive feature: the cargo area is exceptionally easy to load or unload, either by transporter or through large external hatchways mounted in both sides of the hull.

Internally, the Charles class is a “four­decker,” with the top deck serving as the bridge and fire control center, and the second deck containing the crew quarters and transporter. The third deck includes the computer system, engineering, and assorted support equipment, and the bottom double-height deck is almost exclusively devoted to the cargo area and the cargo transporter.
Even so, the Charles is often compared unfavorably with the much cheaper Mission class transport which actually possesses a larger cargo capacity. Fortunately, the Charles is reasonably popular with its crews, most of whom are Andorians who appreciate having even a small weapon aboard their merchant ships.

To date, two ships of this class have been lost or confirmed destroyed. The SS Governor of Paris, operating along the Gorn border, was attacked and destroyed in 2274 by a Gorn SS-3- class destroyer. Sadly, this attack came only a few standard days before the UFP and Gorn Alliance signed the Frontier Accord, limiting military activity in the disputed area.
The SS Sir John Stanley, the second class casualty, was operating in the vicinity of Melkotian space during the early part of 2279. The vessel departed from Daran V with a cargo of assorted luxury goods and missed a routine subspace radio contact in 2279. The ship’s master, an unsavory merchant trader named Beard, reputedly boasted of his intentions to conduct trade with the Melkots, but it is not known whether such contact was even attempted. After several weeks, Star Fleet vessels were called in to thoroughly search the area, but no trace of the Sir John Stanley was ever found.

Despite, or perhaps because of Stratford’s design innovations, the Charles has not been as widely (or as quickly) accepted as originally hoped. So far, the builders have been unable to procure any orders from Star Fleet Command, and the class has gotten some unfortunate negative publicity as a result of the two vessels lost. The manufacturing firm remains one of the smallest of its kind in the Federation, and its staff engineers are still fervently hoping to acquire a small share of the market with this vessel. Most analysts agree that Stratford’s best chance continues to be with independent Orion and Andorian crews, who often place greater emphasis on weapons and less importance on accommodations or personal comfort.
Stratford Starbuilders, Ltd. maintains its headquarters on Terra, but its ship­yard bay is at Salazaar, where the Charles class is produced at an average rate of four per year. At this time, Stratford has no intentions of producing a Mk II, and will only increase production of the Mk I model if there is a sizable increase in demand.