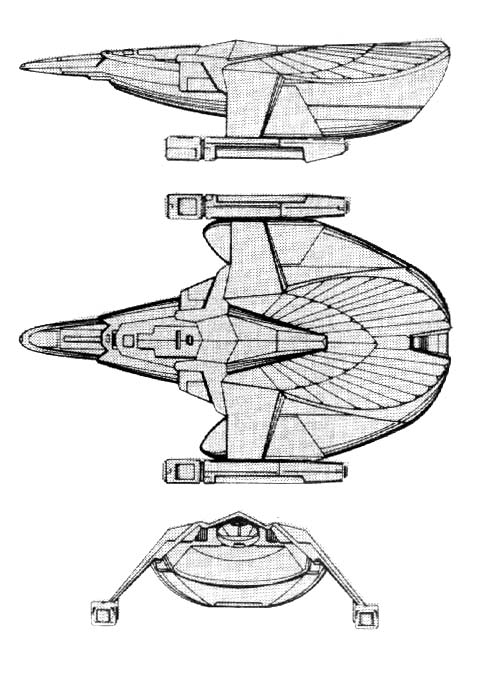 NOTES:
Useful for both troops and cargoes, the M-8 assault ships are reported to be the second most important troop carriers in the Romulan Navy. Although the M-8s do not carry as many troops as do the M-4s, they are capable of keeping pace with any fast-moving fleet, as well as being more maneuverable than their counterparts and carrying more effective shields. With it’s ruggedness and reliability, the M-8 has remained a mainstay in the Romulan fleet for many years.

The Type-1 was considered the pan-ultimate in quick conversion, from freighter to assault ship. Unlike the M-4, which required up to four days to convert from freight to troop carrier, the M-8 could make the same change, albeit at a dedicated military garrison, in less than 30 hours. The M-8 also had dedicated ground operations center, allowing any ship of the class to coordinate troop movement and combat operations. In its civilian freight operation mode, this space was often used by Romulan corporations to conduct freight and cargo transfer coordination. This would require very little component switch-over should the M-8 be called up for combat operations.

The Type-2 saw the replacement of the main warp drive and computer. This allowed a higher emergency warp speed when needed and allow for the increase in the main weapons. An additional disruptor mount was added, with all three disruptors increased to the long-range RB-11. The Type-2 would remain unchanged for many years, until the loss of three M-8’s to a single Klingon attack cruiser 2345. Although some felt the now aged M-8 should be replaced, designers felt that an update to the tactical systems could allow the M-8 to continue service for years to come.

The Type-3 was eventually launched in 2348. Doubling the number of disruptors, the Type-3 also added a torpedo launcher, making the M-8 capable of conducting light destroyer duty when needed. The Type-3 was a purely military version, with no known civilian variant fielded.

Of the approximately 190 built, nearly 180 are still in active service. 90 vessels of this class are thought to be operating in the civil sector; it is uncertain if these vessels are Type-1’s or Type-2’s – until close scans are possible, this remains speculation. During the Dominion War, nearly 100 Type-3s participated in transporting troops to the front line. Only 2 were lost during the conflict.

The class is named from the Romulan temar vastari (night flyers), in reference to a large reptilian bird of Hannrileth, solid black in color. In keeping with its namesake, the assault ships reportedly are painted midnight black.