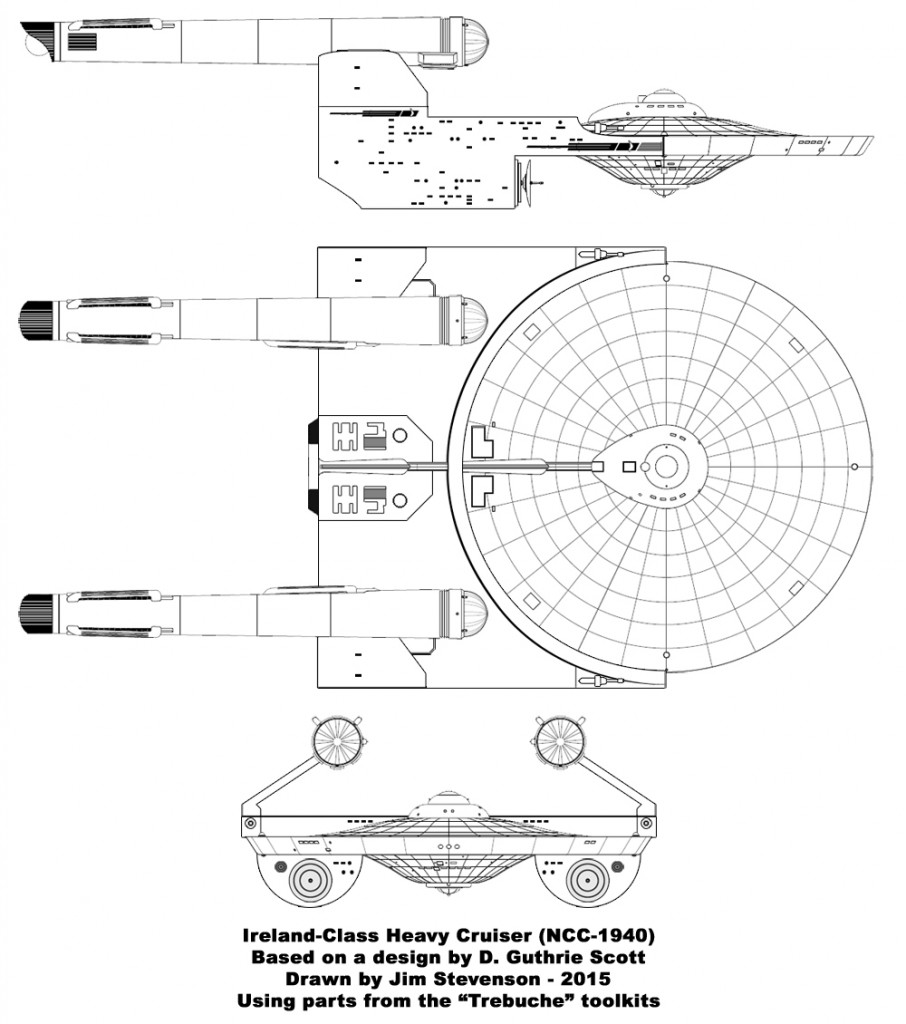 NOTES:
It has been said that, “The pinnacle of an old technology will far exceed the birth of a new technology.”Such is the case of the Ireland Class Heavy Cruiser in the late 23rd Century.

Designed for enhanced performance and greater independence to support longer mission duration including lengthy deep space exploration, the Ireland Class represents a culmination of knowledge taken from over 20 years of Constitution and Miranda Class mission reports.

The Ireland Class sports 2 primary, integrated components. A modified Constitution Class primary Hull (saucer section) and a crescent moon shaped star drive section which the saucer is hard docked into with a series of clamping mechanisms. In case of an emergency, such as an antimatter containment breach, the saucer can disengage from the star drive section by retracting the clamps or by use of a series of micro-detonators. The saucer’s impulse engines, already being active, can easily carry the crew to a safe distance. Reintegration of the saucer and star drive sections will still require a star base repair facility.

Both the primary hull (saucer) and star drive section have their own complete set of impulse engines. Both of which remain active at all times. The saucer’s impulse engines are not visible when the ship is in one piece. But they are present and embedded into an armored area of the star drive section, constantly providing additional energy to the ships power grid. This energy can be used for almost any ships system including life support, shields, or standard phaser banks. As a beneficial side effect, the pressurized ion exhaust from the saucer’s impulse engines is shunted into the ships maneuvering thrusters dramatically increasing maneuverability.

Taking advantage of the ships low profile the Ireland Class warp drive generates an elliptical warp field. The advantage of an elliptical warp field combined with the ships design is that it allows the ship to transition to warp faster and accelerate at warp speeds with 25% less energy required. This gives the Ireland Class excellent maneuverability in spite its size.

The FMH-11 Heavy-Phasers, which would eventually become the standard FH-11 phaser systems several years later, are powered directly from the warp energy plasma flow.. This allowed them to be changed prior fired to firing, allowing increased damage and greater targeting accuracy. The prototype weapon system also allows for a full or partial charge can be held in the capacitor without the reduction of computer targeting power. While many of these components soon became standard, it was the Ireland class that first allowed the practical use of these systems.