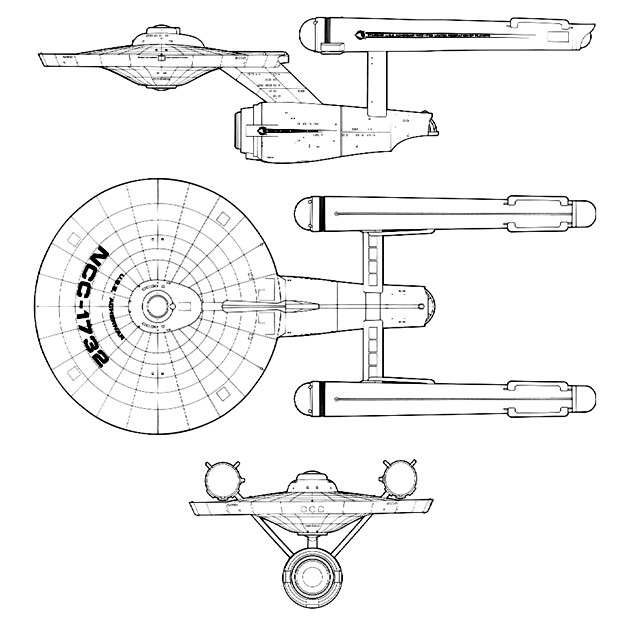 From Ships of the Star Fleet – Volume One, Calon Riel & Mastercom Data Center

The Achernar is commonly refered to as the end of an era, and was the last Federation starship to be designed using “old” technology format. The Achernar was originally designed to take advantage of advancements in warp drive technology, shielding and weapons, and at the time it was first drafted, the Achernar class was truly ahead of it’s time. But rapidly, the Achernar’s planned advancements fell behind before tooling was even begun.

The Mk I was launched in 2265, several years after the launch of the Mk III Constitution. The Achernar’s primary advantage over other heavy cruisers was it tremendous maneuverability. The Mk I was lighter and more agile than most other cruisers, and was envisioned as a replacement for many of the older designed Constitution cruisers that it so closely resembled. The Achernar Mk I was well defended, using the multi emitter FH-8 phasers. The FH-8 did not have the range of other phaser weapons, but the increase in power over other heavy cruiser weapons did prove effective. The FH-8’s reputation as a sturdy weapon was reinforced in early 2267; the Achernar herself engaged two Tholian heavy cruisers that had crossed the boarder and captured a Federation communication satellite. Realizing that the heavy cruiser was between them and the safety of the boarder, both Tholian vessels fiercely engaged the Federation vessel. Despite repeated hits to the phaser systems, the Achernar was able to continue the battle and eventually destroyed the satellite before the Tholians crossed the boarder. The Achernar returned to her base for minor repairs and continued on her patrol route.

But the Achernar still had a number of short-comings, the least of which was speed. With a top warp speed of only warp 6, few felt that the Achenar was equipped to handle the rigors of deep space. In early 2267, the class was upgraded, using several new design techniques. Re-launched later that year, the Mk II increased nearly every component of the heavy cruiser’s inventory. Increased weapons, shields and computer power all breathed new life into the Achernar design. Although other heavy cruisers were soon surpassing the Achernar’s more basic design, the Achernar class remained a potent escort vessel near hostile boarders. The Achernar remained in active service until mid the 2290’s when the last vessel was retired from service as a training vessel.
Although the twelve remaining Achernar vessels remain in mothballs, there are no immediate plans to reactivate or scrap the ships.