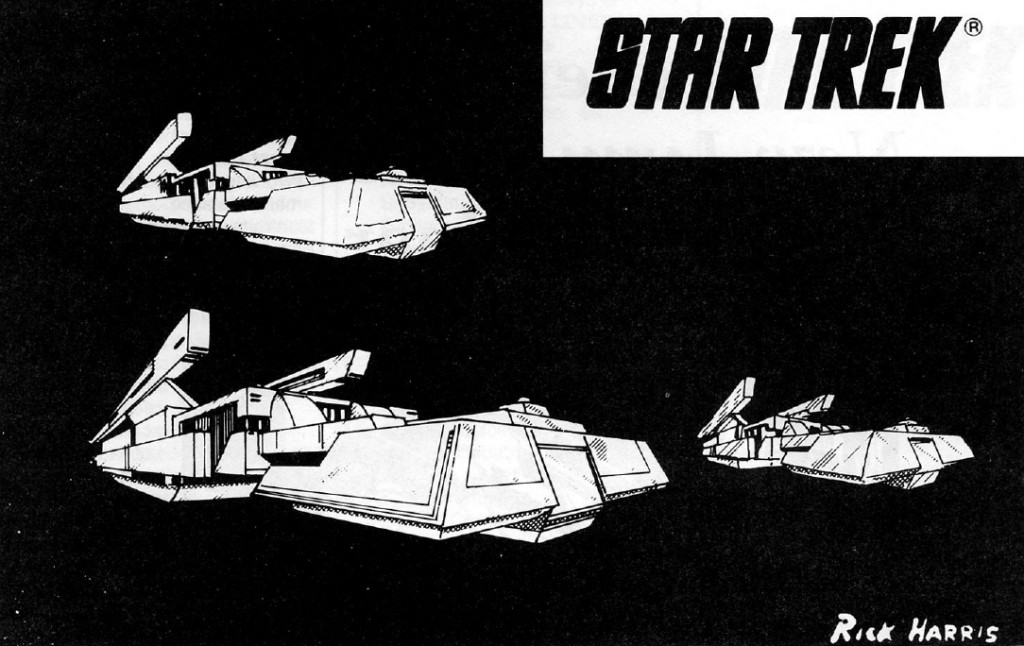 design by John A. Theisen
Art by Rick Harris

NOTES:
During the last decade, many senior officers in Star Fleet’s Colonial Operations Command have been divided among two schools of thought. One group, led by Andorian Admiral Shola Trannath, advocates armed and heavily shielded transports for colonial supply missions. The other group, whose ranking spokesman is Admiral Reginald Winthrop, wishes to see an increase in the use of robot freighters for nonhazardous assignments. As the result of a ne­gotiated compromise in design philosophies, Star Fleet engineers have created the Shasta class robot freighter.

Though the Shasta class robot freighter is a new design, many shipboard systems on the Shasta have been in regular use for a number of decades (the sole exception being the FIF-2 impulse engine). Thus, the Shasta has an excellent reliability and maintenance record.

The hull superstructure combination is one of the most heavily reinforced Fed­eration designs ever, capable of withstanding more damage than an Enterprise-class cruiser! Of course, the Shasta’s FSH shield generator, while respectable for a freighter, scarcely makes the vessel battle worthy.

The Shasta is exceptionally stable in flight even when fully loaded, and its over­sized M-2 computer always keeps the robot ship operating within flight parameters. The FWE-1 warp engines, selected for their low cost and ease of maintenance, appears to make the starship somewhat underpowered, especially while operating at slower-than-light speeds. Nevertheless, the FIF-2 goes a long way toward correcting that weakness.

From the standpoint of cost-effectiveness, the Shasta class robot freighter is roughly one-third more expensive per cargo ton capacity than the more common Liberty class freighter. Despite this, there clearly are circumstances in which a sturdy, well shielded, unmanned vessel proves superior to a more fragile, crewed ship. The Shasta class is also being considered for purchase by at least three separate commercial firms.

The USS Chapeton, the only Shasta class vessel to be scrapped, was involved in a shipyard accident at Morena. The freighter, carrying a volatile cargo of neutronic fuel, happened to be in dry-dock for a routine secondary computer system malfunction when an explosion of unknown origin rocked the hull, and the ship caught fire. No one was aboard, and there were only a few minor injuries, but several bulkheads were destroyed. The ship (still carrying almost its entire cargo) was deemed “a sub­stantial hazard to shipping.” The Chapeton was hastily towed to deep space and safely destroyed by low-intensity phaser fire. Remains of the ship’s hull were retrieved and melted down for future use.

The SS Patches (formerly the USS Green Peter) is operating with Speckled Cat Shipping Lines, a small merchant coalition operating in the Triangle. Patches, the flagship of the line, routinely visits worlds of the Baker’s Dozen, between which it maintains a regular route.

Of the 106 produced as of 2287, 91 are serving with the Colonial Operations Command, 4 are with the Merchant Marine Command, 1 is with the Training Command, 8 are in reserve fleets, 1 was sold to a commercial firm, and 1 has been scrapped. The Shasta class robot freighter is currently in production, and is being manufactured at the Federation shipyards at Sol III and Wall. Combined average annual production totals 40 ships per year, and a total of 240 have been ordered by Star Fleet to date.