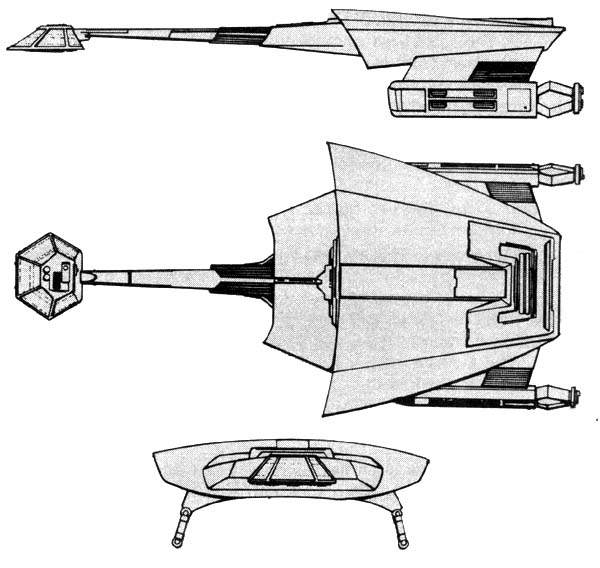 NOTES:
When the L-9 frigate was introduced on Stardate 2/1507, the Klingon Imperial Command boasted that it was the finest warship ever produced, and it has indeed become one of the most respected warships in known space, proving itself time and again to be a worthy opponent.
The L-9 has the angular design of the earlier K-23 class escorts. Its command pod, like all others, can be jettisoned in emergencies and is capable of life support, limited maneuver, and even weapons fire for up to one year on its own. Engineering, located in the central aft section of the ship, has a secondary bridge used when the main bridge has suffered damage during combat or when the command pod has been separated. Located in the lower decks of the main hull are hypothermia capsules that can be converted into temporary quarters for short missions. The shuttlebay is located forward of the engineering section, the shuttlecraft entering from the underside of the main hull. A total of six, and in earlier models eight, disruptors are mounted in the command pod and on the main hull near the where the boom attaches. A plasma weapon or forward-firing torpedoes are mounted in the lower portion of the main hull, and aft-firing weaponry (including two disruptors) is mounted in the lower rear of the main hull.
Sector Intelligence and Operation Dixie have revealed that L-9s are being produced at the facilities of Taamar, Fonawl, and Gnuu Re’. The latest estimates on production rate are 11 L-9s per year. The class is named for the sivista, a dress sword worn by senior Klingon officers; the exact translation is “fast-sword.”
The L-9A, commissioned on Stardate 2/1507, uses the KWE-2 warp drive system, which gives cruising speeds of Warp 7 and in emergency speeds of Warp B. Mounting four KD-8 and four KF-10 disruptors firing into the forward arc, the L-9A could deliver a devastating blow at close range; the KD-10 has an offensive range of only 60,000 km, however, and this forced the vessel to close with enemies to deliver its full punch, a drawback that made the L-9A an unpopular vessel, The new KSP deflector shield, using a trinary trans- former to deliver maximum shield strength at one-third the power cost, coupled with a reinforced superstructure, made the L-9A a formidable opponent.
The L-9A was commissioned an Stardate 2/1507 and withdrawn from service on Stardate 2/171 0, one of the shortest-lived warship models in any navy. Just eight months after its introduction, the L-9A was found to be ineffective in delivering long-range offensive strikes, but, until the facilities were retooled to replace the disruptors with the KD-13, production continued. Of the 32 L-9As built, 18 were converted to L-9Bs, 12 have been destroyed, 1 has been captured by Star Fleet, and 1 has been scrapped.
Although the L-9B is not the newest model, it is the most common. The only change this model incorporates is in the weapons system. The KD-10 disruptors were replaced by the KD-13, increasing the offensive range 350% and allowing the L-9 to deal with opposing capital ships at long range.
Of the 84 L-96s built, 66 remain in active service, 14 have been destroyed, 1 has been captured by the Romulans, 2 are listed as missing, and 1 is in the service of a ranking family of the Empire.
In the L-9C, an uprated impulse drive system was added to increase the total power output, but the warp envelope proved unstable, and it was not until the L-9E, mounting the KIE-2, that stability was achieved. The addition of the photon torpedo bays in the fore and aft positions made this model a feared opponent even though two disruptors were dropped from the weapon complement, best approached from the flank even though two of the forward firing disruptors were removed. The E also has a strengthened superstructure.
Of the approximately 25 L-9Es built, reports indicate that two have been destroyed. The disposition of the others is uncertain.
The L-9F mounts the more-powerful KWE-3 warp engines. Furthermore, the KD-1 3 disruptors have been changed to the KD-8, which does not have the extended range of the KD-13 but delivers a more powerful blow.
Of the approximately 25 L-9Fs built, all are believed to be in active service.
The L-9G is believed to have been responsible for the destruction of the ships of Operation Dixie, but reports confirming the existence of this model are not forthcoming. The model is believed to carry fewer troops than the other models, a reduction thought necessary to house the RPL-1 plasma weapon reportedly mounted in the lower main hull. These vessels are assumed to be operating along the Empire’s coreward borders.