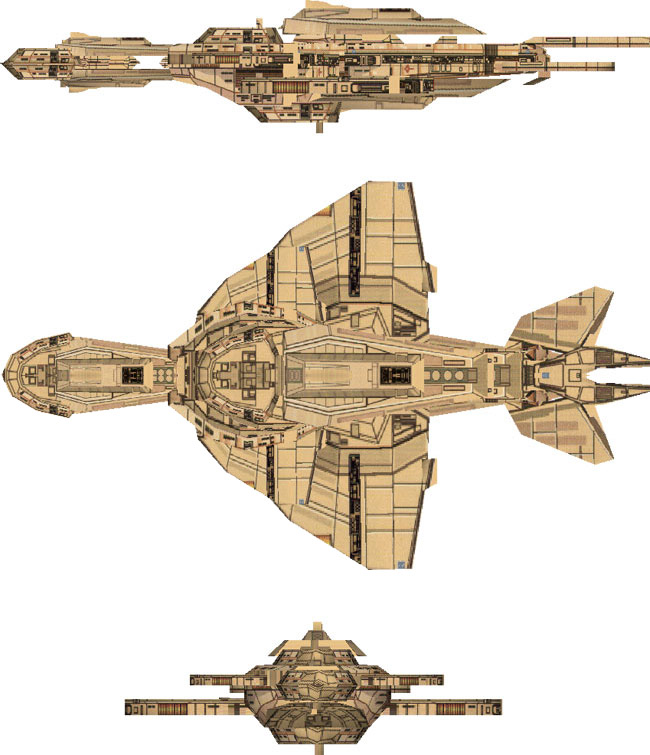 NOTES:
The Borak was a popular large destroyer design that war born from the need for a more robust hull system to help counter the capabilities of the early Breen energy weapons. Designed during the waining years of the Cardassian-Breen boarder conflicts, the Borak was intended to provide a powerful forward punch.

Yet the Borak never saw use in it’s intended conflict. The Breen conflict ended with a tenuous peace accord even as the first hull pieces of the Boraks were being laid. The basic design was intended to counter the Breen weapons by using photon torpedoes rahter than the traditional spiral-wave heavy distruptors common to Cardassian ships. Instead, the design was used successfully against the Talarians after a second conflict erupted.

The Type-1 was equipped with the powerful CWD power-plant which powered the CWD-4 warp coils. The powerful power-plant would prove crucial as the Cardassians began yet another protracted conflict, this time with the Klingons. While the Klingons were using older vessels this far from their core worlds, the Cardassians, like most races who were forced to counter the Klingons, often found them selves outnumbers two and even three-to-one. The Borak was able to prosecute the conflict successfully, and went on to serve in the Cardassian fleet

The Borak would go on to serve during the Tzenkethi conflict and again against a full scale war with the Talarians. In 2320, the Borak class was officially retired from the Cardassian fleet.