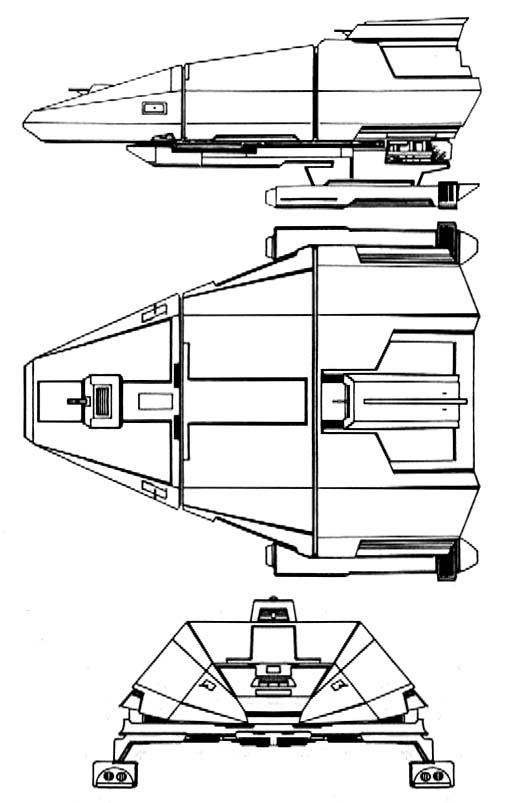 NOTES:
The Vovossa class monitors are one of the newest ships to be scanned along the Federation/Gorn boarders. These vessels have only recently appeared on long-range scans and seem to be performing the duties of a system monitor. Their actual duties are unknown at this time; however, all monitoring of these ships indicate that they are only used in systems that share a common boarder with the Federation.

Their numbers seem to be increasing, so that a vessel entering Gorn space would most likely encounter a Vovossa. Anyone encountering one of these vessels can be assured of being stopped and boarded by a contingent of twenty Gorn marines who will certainly demand the surrender of the vessel. As of this date, no JI-2 has been boarded or even visually sighted by anyone from the Federation. All data that has been produced has been gathered from long-range sensor scans.

Like all the Gorn ships know to Star Fleet, the JI-2 is an unmaneuverable heavily-armed gun platform. This class of monitor mounts four GBL-3 and four GBL-4 blasters that are capable of overlapping fields of fire. The major drawback to the Gorn weaponry is it’s lack of adequate range and it’s limited damage-inflicting capability. The GBL-3 has a range of only 150,000km, and the GBL-4 only 180,000km. Against any capital ship of the major star-faring powers they would be at a severe disadvantage, but the monitor is not untended for combat of this type. Against marauders, smugglers, pirates and the like it is more than a match, and for this it was designed.

It has been speculated that all Gorn vessels use little shielding in their engine compartments and the JI-2 is no exception. Even the most cursory scan of these vessels reveals that they emit a very high level of radiation.The strength of these emissions suggests that the levels inside the craft might be fatal to Humans and humanoid life. It seems that the Gorn skin is capable of resisting or deflecting such harmful radiation where Human skin can not. It is very doubtful that any member of any Federation race could survive for very long without personal shielding if help captive in any Gorn vessel.