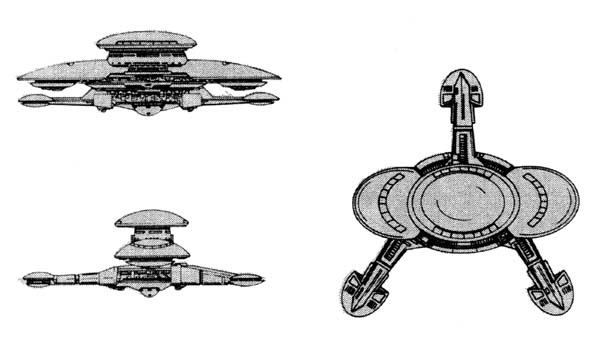 NOTES:
Being introduced on stardate 1/8902, five years prior to the outbreak of the Four Years War, the Klingons began to supplement their border listening posts with the Z-4. These fortresses were placed in the areas where the Klingons wished to deny or restrict enemy movement. Since their introduction, the Klingons have constantly added to their number. Major defense points (such as starbases) will have more than one Z-4. Several points along the Federation and Triangle border are known to have as many as eight, each giving the others covering fire.

The Z-4 is so large that it had be built in place; if one must ever be moved, it is disassembled into six different sections and each one brought to the new location. Most of these outposts are found within a planetary system, but some areas requiring defensive boundaries do not have this luxury.

When first introduced, the Z-4 was capable of fulfilling its mission completely as designed, but with ships becoming more and more powerful, it was inevitable that they be upgraded. The Z-4B remained in service for 30 years before all were replaced with the Z-4C. On stardate 2/1403 the upgraded Z-4C was introduced, with the newly produced KMAPG-3 warp system and KIPG-3 impulse deck, both of which offered sizeable energy production increases compared to the Z-4B model. Also improved were the type and number of disruptors, as well as the addition of a potent torpedo model, the KP-6, which does as much damage as the Federation FP-4 torpedo. With this increase in weaponry, and an offensive range of 200,000 km, the Z-4C was not a likely target for small groups of ships.

With the introduction of the Z-4C, the production rate averaged 23 per year. Reports indicate that a faction within the Triangle was able to purchase one of these facilities shortly after the destruction of Praxis.

The Z-4D was introduced in 2290 and was expected to be the most powerful version of the “Deathgame” stations. The Z-4D increased the primary weapon damage and also vastly improved the secondary beam weapons, as well as increasing the overall firepower of the main torpedo system. Unfortunately, the destruction of Praxis drastically affected the production of the Z-4. Although 23 new stations were under construction at the time of the accident, none were completed until 2295. By 2300, construction of new Z-4’s was completely halted to allow continued production of needed equipment for the homeworld.

This was not the end of the Z-4, however. By 2320, all Z-4C’s had been updated to Z-4D’s, and plans were underway for a further upgrade. In 2344, the Z-4F was authorized with several stations along the Romulan boarder scheduled for upgrade. By 2346, the first of these upgrades was completed and the Z-4F was officially entered into the naval muster. The Z-4F doubled the overall firepower of the Z-4D. Upgrade to all Z-4D’s along the Romulan boarder was completed by 2359. Surprisingly, nearly 30 of the Z-4D’s along the Federation boarder were disarmed and sold, with numerous Federation and Orion corporations purchasing the stations for a wide range of uses. The remaining stations would not be upgraded until the Dominion crisis. Nearly all of the remaining stations were hastily upgraded when the initial Fedration/Klingon conflict began. None were finished during that conflict, and only about a dozen were finished with upgrades during the Dominion war. Three stations that had not been upgraded were destroyed when Dominion forces made major advancements into the shared Klingon/Federation territory.

In the Klingon navy, command of these outposts is not sought after. The duty is considered to be demeaning as it doesn’t allow many chances, if any, for glory in combat. The commanders of these bases have a great deal of power in their hands nevertheless. The bases are usually accompanied by repair facilities and other much needed diversions for front line units, all under the base commander’s jurisdiction. There are no immediate plans to upgrade current stations, as many have spaceframes that have far exceeded their planned usefulness.

The name is a translation of the Klingon zha mortas.