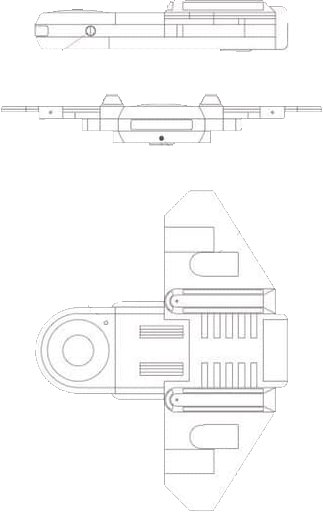 NOTES:
The Emerson scout was one of the first true joint ventures proposed between Xaxxi Mechanistics, Ltd and Grupharg Shipbuilding. As the Four-Years Was was drawing to a conclusion, Grupharg found that many of it’s Borok class of scouts had proven only moderately effective during the conflict. Star Fleet had already cancelled plans for a medium range vessel based on the Borok, worrying many at Grupharg. Xaxxi executives had expressed an interest in expanding their interests into starship construction, but suddenly found that the war’s end dried up many possible lucrative design contracts. Through sheer chance, the CFO of Xaxxi and Master of Operation at Grupharg had a meeting with Admiral William Emerson of Star Fleet Procurement. In a masterful stroke of genius, Gollush Prirg of Grupharg decided to push the possibility of a joint venture rather than attempt to convince Emerson of rethinking the cancelled Borok class contracts. Arezz of Xaxxi realized the the joint-venture concept would give Xaxxi a far greater chance of expanding their contributions in the field of starship construction. Emerson quickly realized the merits of the joint design even as he contemplated the reduction of many older ships that had participated in the war.

Grupharg and Xaxxi were give four months to finalize a “capability” report detailing the proposed system and flexibility of the design. Grupharg allowed Xaxxi to take the lead on the myriad of subsystems that would be installed, preferring to focus on the primary power system. Xaxxi quickly packed the proposed design with a tremendous number of sensors, research equipment and exploration systems that rivaled anything currently in the Federation fleet. By mid-2256, Emerson was forced to reign in the Edoans and begin to make cuts to the final design. By years end, the Mk I was completed and ready for trials.

The Mk I was quickly met with controversy once it was officially adopted into the fleet. The decision to arm the Emerson with long range phasers and a powerful torpedo gave the light scout firepower equivalent to many destroyers (and even some cruiser) of the era. Advocates for a less militarized Star Fleet used the Emerson, along with several other high-firepower designs, to further their cause by citing the peace accord with the Klignons. Despite the rhetoric, procurement officially approved a total of 30 Emerson scouts.

Along with it heavier firepower, the Mk I retained many of the Edoan subsystems that gave the Emerson a significant advantage while performing it’s scouting duties. Internally, the Emerson was a very communal design. Enlisted and junior officers were billeted in two large barrack style spaces, allowing for the inclusion of larger recreation areas. On-board facilities and operating areas were also larger than on other Star Fleet designs, making service aboard the Emerson class both popular and comfortable.

None the less, the Emerson could not seem to shake the controversy surrounding it’s armament. The heavier firepower meant that Star Fleet often assigned the Emerson class to support research and first contact missions in more hostile areas. Several Emersons were also detailed to destroyer patrols along the Romulan frontier despite is scout classification. Under increasing pressure, procurement eventually reduced the total number of hull ordered from 30 to 21. But 2264, the number had been reduced further to just 11.

By 2270, the Emerson was beginning to loose much of its initial appeal. The cost of maintaining the primary systems was one of the few saving graces for the design. The use of the FWA warp system meant that the Emerson class could easily be refurbished in the field. Those that were damaged in combat were also easy to repair and relaunch, with repair costs estimated at 20% less than other designs.

In 2273, Grupharg proposed a unique torpedo design that would allow the Emerson to field the powerful FP-4 main torpedo. This designs doubled the torpedo firepower and continued to place the scout at the edge of technological combat capability. To avoid the public spectacle that the Mk I was met with, Morris Magnatronics quietly included the proposal for the mk II Emerson along with a wide range of other design improvement on nearly 40 other front line vessels. The design was approved, along with the inclusion of a Z-range particulate spectrometry sensor suite and a newly redesigned interstellar chemistry pallet. By 2274, 10 additional Emersons had been ordered with 6 eventually being delivered before funding was cancelled.

By the late 2290, the Emerson, despite it’s combat prowess, was used less and less along military boarders, finding many of its missions far more routine than in years past. By 2320, nearly all remaining Emersons were assigned to followup missions along the spinward frontier. Grupharg and Xaxxi had both given up on redesigns of the Star Fleet version of the Emerson. Xaxxi had created an Edoan version that had proven popular as a light transport, while Grupharg had begun producing a destroyer version for the Tellarite government.

In 2330, engineering students at Star Fleet Academy were given the task of improving a wide range of older fleet vessels as apart of their graduation thesis. In 2331, a proposal from refitting the Emerson was put fourt, and grabbed the attention of several senior officers at the Academy. The proposal indicated that improved shields, weapon and a major computer upgrade could all be accomplished on the Emerson at nearly one-third the standard cost of such upgrades. Within a year, the Mk III was approved and several Emersons were brought out of mothballs to complete the project.

The Mk III replaced the M computer system with the far more efficient I series. This allowed for the increase in the impulse drive as well as replacement of the main defensive shields. The Mk III would remain in service for 10 more years, finally being retired in 2342.

A total of 17 Emersons were fielded by Star Fleet, including 11 MK I’s and 6 Mk II’s. 1 Mk I was captured by the Klingons and later used by the IKS. 1 Mk I and 1 Mk II have been destroyed. 1 Mk II had been scrapped. 6 Mk I’s were converted to Mk II’s. 8 Mk II’s were converted to Mk III’s. 3 Mk I’s, 2 Mk II’s and 2 Mk III’s are in reserve fleets. 6 MK III’s were disarmed and sold to civilian concerns. The Emerson is named after Admiral William Emerson who green-lighted the project.