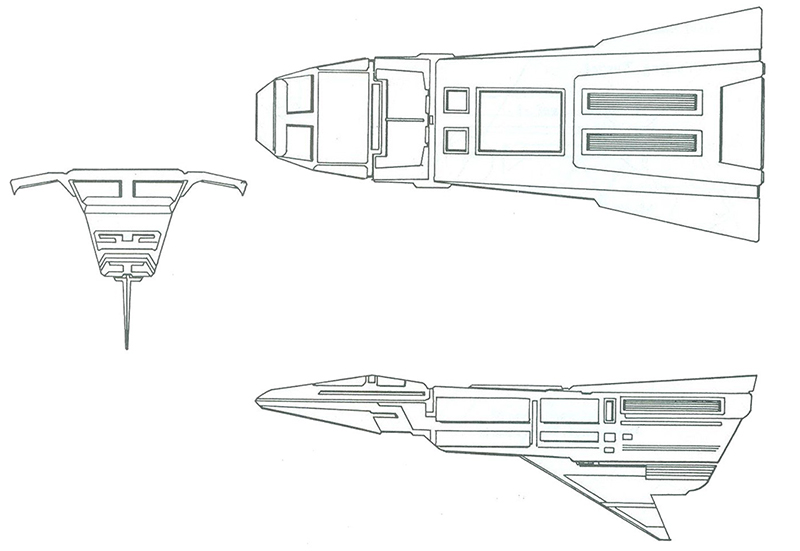 NOTES:
The Berena class free trader was designed by Merchant Captain Beowulf Leahy during a stint as helmsman aboard the S.S. Wells Fargo (an old Mission class cargo transport). Leahy wanted to design a ship with trans-atmospheric capability, efficient power-to-­movement ratio, and high warp capability when fully loaded, with high-quality crew accommodations. During an unscheduled layover at Salazaar (where it was determined by Star Fleet inspectors that the Wells Fargo was no longer fit for flight), Leahy presented his ideas to a fellow crewmember, Junior Engineer Alyssa Berena, who seemed intrigued by the idea. They accessed the local datanet and found that the proposed parameters could indeed be satisfied.

Finding a sponsor was a bit of a problem due to the 16+ MCr required to construct a unique vessel. Unbeknownst to Leahy, the rest of the crew had taken a vote (with the Captain’s blessing, since he was retiring) and agreed that with him as Captain and with everyone as equal partners, they could provide the necessary down payment by pooling their lifesavings and applying for a 20-year loan to pay the rest of the procurement costs. Leahy had enough credits put aside to guarantee the loan’s approval.

The crew, in honor of the Engineer, named the class after her. Construction of the S.S. Farstar began shortly after the loan was secured, with the ship ready for launching on 2279. Leahy named the ship after an old (circa 20th-century) Terran science fiction novel given him by his grandfather, which influenced his decision to become a merchant. Beowulf Leahy’s motto was simple: “A rough, honest living and your dreams come true.” The Farstar’s coat of arms shows the crew’s friendship and respect for each other over the many years they served together. As Alyssa Berena put it, “We are the ship; the ship is our lives. You get ’em both- we’re inseparable.” The crew of the S.S. Farstar still serve together, their loan paid off years ahead of time due to the royalties they now receive from Synch Warp Enterprises, Inc., the exclusive manufacturers (under license) of the vessel.

The Berena class free trader has been observed by mer­chants and customers alike as “the perfect adventurers’ ship,” able to carry a full cargo load quickly (at Warp 6 standard and Warp 7 emergency speeds) to its destination with high maneuverability and trans-atmospheric capability. As far as merchant vessels go, the crew quarters are cramped but quite comfortable for a vessel its size.

Though Star Fleet regulations prohibit the unauthorized mounting of phaser or photon torpedo weaponry onto merchant vessels, the ship is equipped with concealed weapons lockers (one on the bridge and one in Engineering) in case of uninvited guests; most merchants stock these lockers with phaser-II’s, slug throwers and shotguns. Current sales projections by Synch Warp show that this vessel is extremely popular in the Triangle and frontier areas of the UPP, and will continue to be in the years to come.