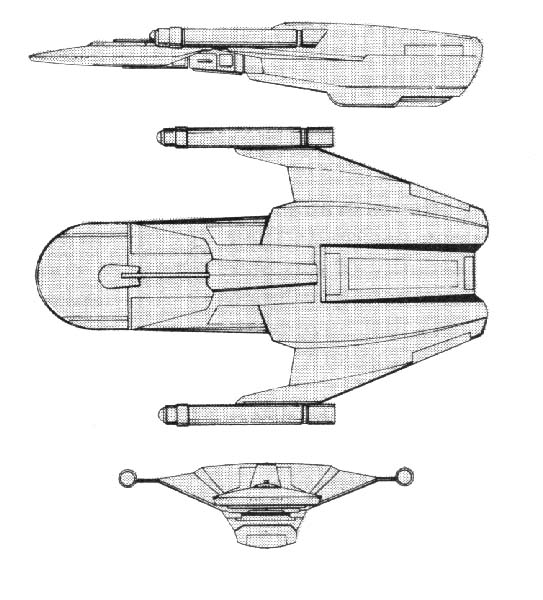 NOTES:
The M-4 assault ship, reportedly capable of carrying up to 300,000 metric tons of cargo or 1,800 troops and their equipment, was thought to be the main transport for Romulan ground forces throughout the late 23rd and early 24th century. Introduced in 2267, intelligence reports indicated that the vessels had participated in several invasions. Of the more than 150 built, nearly all remain in active service until 2335 when the class was finally retired. Intelligence reports show no record of any being sold to the civil sector, and none are known to be operating outside the empire.

The Type-1 was lightly armed, with the intentions that heavier combat craft would protect this vessel during operations. The Type-2 was far more heavily armed after several vessels were damaged during front line operations. While not a major warship, the Type-2’s armaments did allow defending escort vessels to intercept incoming threats rather than remain on-station while the M-4 conducted landing operations. All 150 M-4s were refit to the Type-2 variant between 2290 and 2295.

The vessel likely is named in reference to the following quote: “The Romulan soldier will lead the way and secure the foundations of the Road to the Stars, for he will be borne on the wings of justice — Arenius Triario, Commander.” According to The Eridam Papers, this historic statement was made by Commander Triario as the Romulan fleet departed for a great battle with the Corillians. Triario was victorious and returned a hero.