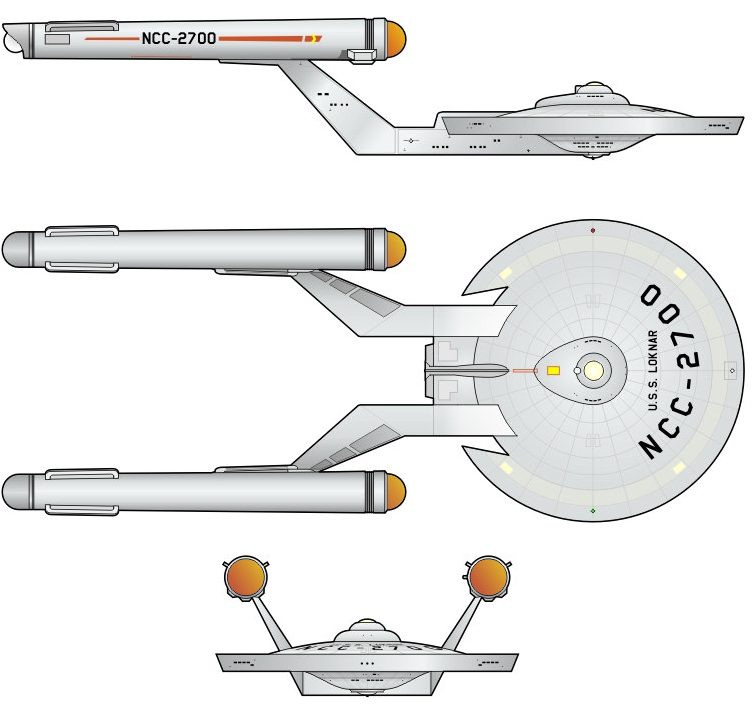 NOTES:
The Loknar Class frigates were built during “The Great Awakening”, a period of expansion by the Federation. During this time, many research and exploration vessels were designed and built to aid in the effort to solidify an enlarged and growing United Federation of Planets. Also during this period, a smaller number of warships were built. The Loknar, the most noted of these warships, is still in service to this day, a tribute to the quality of the Andorian design.

Soon after the Federation Appropriations Committee granted Star Fleet the funds necessary to construct fleets to expand and patrol the limits of the UFP, Andorian factions began pushing for warship construction. The basic Andorian philosophy was that, in expanding, the Federation might come upon races as hostile as the Romulans and Klingons, leading to another protracted war broke out for which the Federation and Star Fleet were unprepared. The Andorians argued that, were this to happen or were the Klingons or Romulans to escalate hostilities, Star Fleet needed to be better prepared and would need ships to protect the new borders and colonies. The Andorian arguments were successful, and Star Fleet began a limited build-up of warships. Several ship-building facilities were constructed by Andorian firms to design and manufacture these warships, the most notable of these on Sol IV and Salazaar, the largest and most productive in the Federation.

Introduced on Stardate 1/9010, the Loknar Class frigate mounted the new, but already proven, FWE-1 warp drive, in Star Fleet’s inventory for only two years. The FIC-2 impulse engine was introduced on the Loknar and has since proven itself to be one of the most reliable of all production. The Loknar Mk I was considered a ‘muscle’ ship because of its four heavy lasers and single accelerator cannon, making it equal to all but the largest Klingon vessels and more powerful than any ship in the Romulan navy. In addition, the Loknar mounted FSH shield generators, more efficient than any used by the enemies of the Federation.

During the Four Years War, the Loknar saw more action than any other vessel in Star Fleet. Although it was considered to be successful, the Andorian designers felt a need to improve it. The FWE-2 warp drive systems, still being tested, would produce 60% more power than the FWE-1 and would increase the ship’s overall performance. The Mk II was commissioned into service on Stardate 1/9801 mounting the FWE-2, even though this engine was not officially adopted by Star Fleet until Stardate 2/0002.

The most significant advance in starship technology came with the phaser and photon torpedo. The phaser delivers more firepower at longer ranges, weighs less, and requires less structural reinforcing than the laser. The newly developed photon torpedo delivered the same explosive power at 75% less power requirement, was considerably lighter, and required less structural reinforcement than the accelerator cannon. Eight FH-5 phasers and four FP-3 torpedoes were incorporated into the Mk II, making it more powerful than anything in the Klingon fleet with the exception of the D-10. The Mk II also mounted an upgraded binary shield generator, the FSK, giving 33% more protection at the same output level as they earlier system.

The next major change in the Loknar’s design came with the introduction of the FWD-2 warp drive to the Mk IV. This increased the power output and overall performance by 40%. Furthermore, this model was modified to fire the FP-1 photon torpedo.

Loknar class frigates have served Starfleet faithfully for 33 years and will remain in the inventory for many years to come. Loknars are produced at the Salazaar and Sol VI facilities at a rate of 2 ships per year, including refits. The current production rate is low due to the number of ships required and the high levels of reliability in the existing ships.

The Loknar class frigates are named after cities and provinces of the Federation. More than half of these vessels are crewed by Andorians and the majority of these are assigned to the ‘Blue Fleet’; ships whose crew and officer contingent are entirely Andorian. The USS Loknar was the first ship commissioned into the Blue Fleet, Serving as the flagship for many years.

The infamous IKVS Staav’eMara (Slave of Justice), was originally the USS Morgan City, a Loknar class frigate captured by Admiral Kamato’s forces during the Four Years War and later used in Kamato’s abortive coup attempt on the Klingon throne. After failing, Kamato retreated into the Triangle, taking the Loknar Class frigate with him. From their location within the Triangle, the rebels began attacking unprotected convoys and merchant vessels by using the Staav’eMara to lure them in. This ruse lasted for several years, then a general recall of all Loknar Class vessels made it difficult for the Klingon vessel to operate as though it were from Starfleet. The IKS Admiralty then decided to have the vessel painted in the standard steel gray color of their navy. The Staav’eMara still operates with the IKS Navy and has been seen as recently as stardate 2/2301.