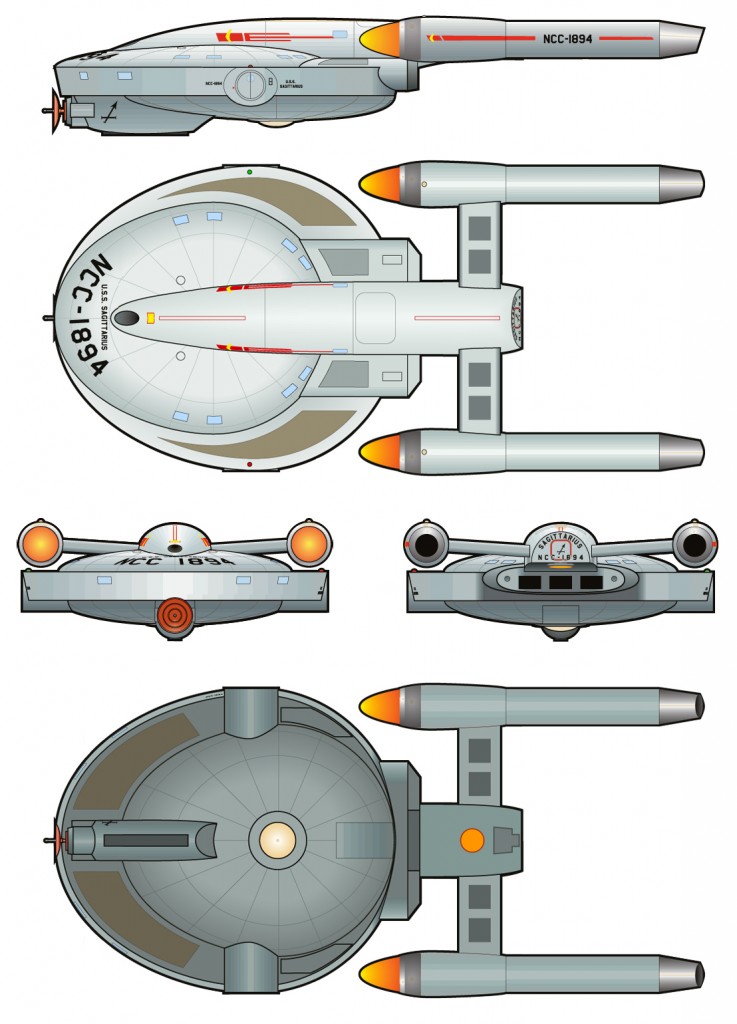 NOTES:
Like so many ships of its time, the Archer class scout was borne out of the necessity of war. With Starfleet pressed to the breaking point in terms of crew and materiel by the middle of the Four Year’s War, everything was in short supply despite increasing need. In order to keep track of the numerically superior Klingon Imperial Navy, fast scout vessels were used to monitor their movements as well as provide reconnaissance ahead of larger fleet movements. The most common scout, the Larson class, was developed in peacetime for a dual exploratory role and had a crew complement and ship size almost that of a destroyer. A newer, smaller vessel was needed that could be produced and crewed quickly while still capable of fulfilling both the current wartime role as well as its traditional peacetime one.

The Archer class scout, named after the famed captain and explorer, was designed to incorporate many of the recently developed technologies. Dual FWA-1 engines provided extra power and redundancy to a ship that would frequently be asked to operate alone with no possibility of timely reinforcement in war albeit at the cost of efficiency and added mass. A pair of phaser turrets along with a combination photon torpedo/probe launcher gave the tiny vessel more firepower than pre-war Federation frigates. Finally, the smallest dual phase shield generator developed was mounted on the ship for additional survivability. Despite its minuscule size, the ship was a match in combat for even some existing enemy destroyers much to the shame of their Klingon captains.

The crew complement of 14 (led by a Lt-Cmdr during war but later a captain in peacetime) necessitated “hot bunking” on the tiny ship with only the skipper and first officer having their own quarters. Despite this, the ship had a small medical and laboratory facility, transporter, and even ground exploration vehicle. The top speed was slower than that of the record setting Larson but the small and stealthy space-frame meant that the ship would frequently go unnoticed at long sensor range. Despite debuting late in the war, almost 100 were built and fielded during that time with more to follow due to the success of the design.

A decade later, the design was starting to show its age and an update was necessary. While the small frame meant that radical changes were not feasible, propulsion improved by the incorporation of updated versions of the initial warp and impulse engines. Tactical improvements consisted of incrementally upgrading both the phasers and shields to newer models compatible with the original computer system. The Mk II entered production on 2110 with older ships slowly upgraded over the next five years. While no longer a front line reconnaissance vessel on contested borders, Archer class scouts are still in service on the expanding frontiers and are more than capable of exploration in those low threat mission profiles.