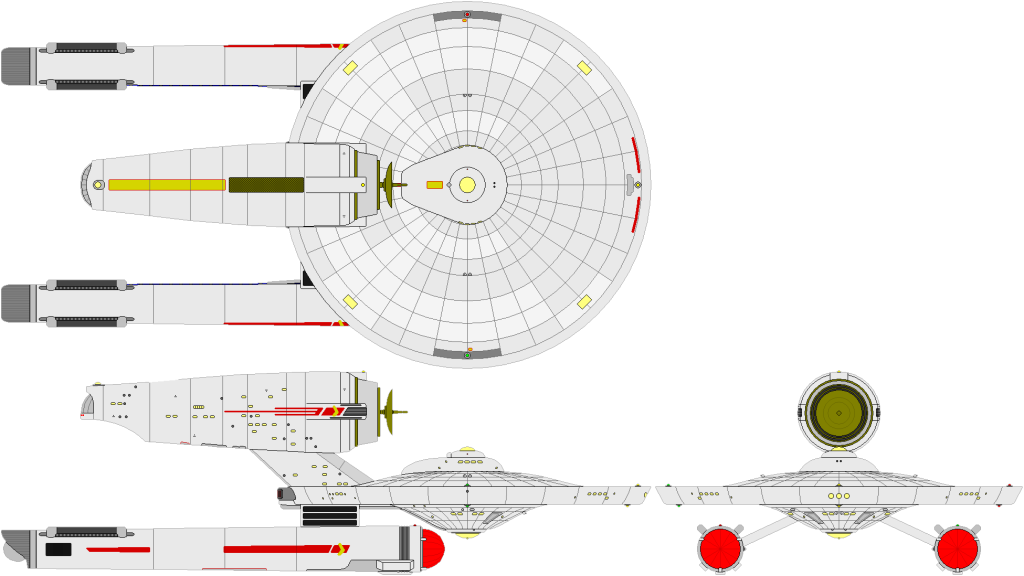 NOTES:
The Maine class of cruiser was one of several attempts by engineers and designers to move the main sensor deflector dish that was standard on most Federation ships. The design was an extension or several earlier layouts that had proven moderately successful, and the Maine proved equally capable when launched.

Unlike some designs, the Maine class placed the primary engineering systems as part of the impulse engineering center in the primary hull. The secondary hull, where the main engineering space was traditionally located, was reconfigured to house additional lab spaces as well as a large-scale deep space observation array.

But the Maine’s research role would have to wait and the platform was thrust into the Four-Year’s War shortly after being commissioned. The Mk I was fielded with standard laser weapons but had the advantage of using the FAC-3. Although power-hungry, the FAC-3 could deliver a crippling blow against an enemy target. During the early stages of the war, the Maine was often in the front lines, supplementing other vessels during combat. Amazingly, with 8 of the 9 completed hulls seeing combat, only one Maine was lost during the war.

In mid-2256, as the war drew to a close, designers began looking into upgrading or scrapping the Maine along with dozens of other vessels from the war. Because of it’s internal layout and similarity to other Class I deep space vessels, the Maine proved easy to modify. The decision was made to re-arm the vessel, replacing the primary laser system with the FH-5 phaser system. More powerful and with longer range, the FH-5 doubled the cruiser beam weapon firepower. Yet designers were reluctant to install the FP-1, deciding on the much less powerful but easier to retrofit FP-2. The lighter torpedo system could easily fit into the space of the older FAC-3 system. The Mk II was finally able to fulfill it’s peace time exploration mission.

The Mk III was a retro fit of the USS Maine herself, which had served two tours. The M-4 computer was installed to handle an increase in the main weapons and the efficient FSL shielding system. The FIE-2 impulse drive gave the Maine class a marginal increase in overall power and the cruiser was once again sent to explore.

The Maine class would go on to serve until 2280, when the last Mk III was dry-docked for conversion. Of the 18 Maine’s built, 1 Mk I and 1 Mk II were destroyed.