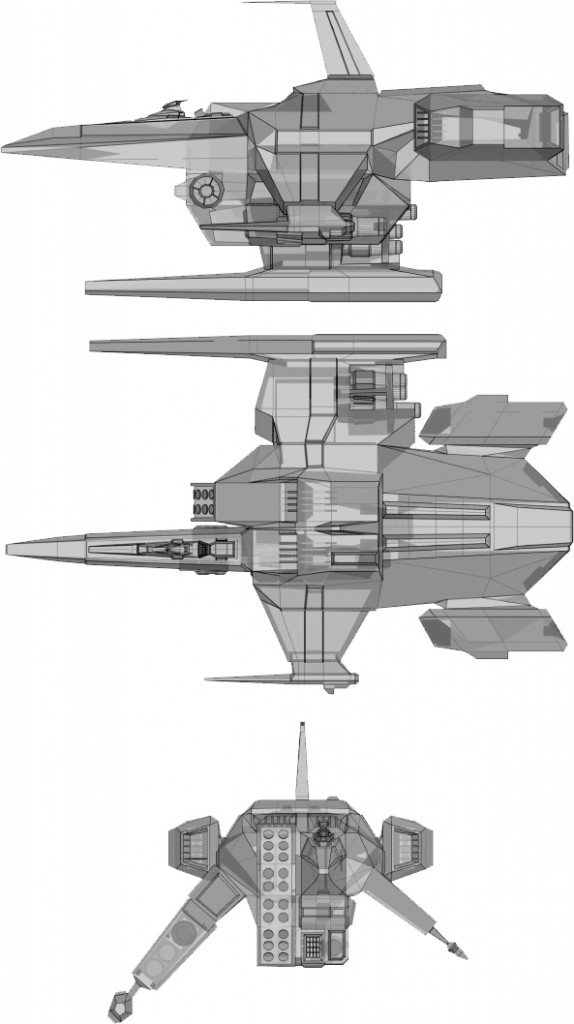 NOTES:
Introduced in 2245, the Mako class of light cutter was introduced not as a pirate vessel, but as a cheap defense vessel for the growing planetary governments of the Triangle. Since its initial introduction, the Mako has proven a popular design, with strong sales continuing to this day.
The A-1 model was considered powerful when launched, with a good maneuverability and light weapons. When used in squadrons of 3 or 4 vessels, the Mako because dangerous to vessels of all sizes. It’s extremely efficient shielding also made it a popular vessel. Sales of the A-1 model skyrocketed during the Four Years War as colonies and independent planets attempted to create their own defense forces.
The A-2 model was introduced just as the war was ending. With longer ranged weapons, initial orders for the craft were brisk, but quickly dropped off after the end of the conflict.
The A-3 was initially a contracted upgrade that became standardized in 2266. A larger impulse drive and heavier weapons all created a more powerful design. Unfortunately, many older Mako vessels could not handle the stress up the upgrade, and sales began to drop.
The A-4 became popular with the less-reputable elements in Orion society, who needed the added firepower to distract defensive elements while convoy raiding. Although ineffective as an actual pirate vessel, the Mako’s extra firepower allowed it to capture cargo and flee.
The A-5 is rapidly become the variant of choice. It’s long range heavy weapons allow it to stand off and harass it’s targets, while providing enough distance to allow for quick escapes. Sales of the A-5 model are restricted in the Federation, but it has proven popular throughout the Triangle and even as far as the Outback.
The Mako is produced at a wide range of Orion and non-Orion shipyards. The A-1, A-2 and A-3 models are no longer being actively produced, although they can be purchased in bulk from a number of sources. The A-4 is estimated to be produced at a rate of 20 per year. The A-5 is produced at a rate of 10 per year. Of the over 800 built, estimates place 500 still in active service.