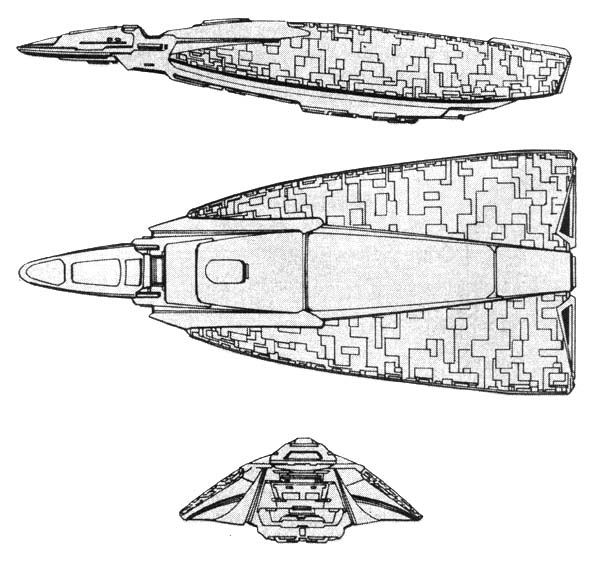 NOTES:
The K-30 was introduced into service to replace the obsolete K-12 monitor, which was unable to operate alone, due to the lack of sufficient maneuvering capability and weaponry. The Empire was expanding at a very rapid pace and needed modern, cost-efficient ships that could operate alone. On Stardate 1/9001, the first of the K-30s were commissioned into service from the Taamar shipyards.

Not long after the commissioning ceremonies, an incident occurred that was an omen for the K-30’s future. A special carrier had been built to move the K-30s to their duty stations. While the first five monitors were being loaded onto one of these carriers, a collision occurred between two of them. Within one year, five of the 20 K-30s produced at Taamar had been destroyed, only one by hostile action. The class was building a reputation for being accident-prone. To add to the reputation, the K-30B and K-30C repeated failed tests of their new sub-light engines and were never put into production. The K-30D prototype, with the new sub-light engine and a new shield generator, suffered several mishaps, one of which damaged the ship so badly that a replacement had to be built. During the final stages of construction, the engine contractor had come up with an improved version of the original design and supplied it instead. The new prototype with the replacement engine, now the K-30E, was successfully tested, but, on Stardate 1/9804, the first five production models were destroyed in a mysterious explosion during loading operations. A prevalent Klingon nickname for the class refers to this series of events; oftimes called Knel (“spell’), the ships of this class are not liked by most Klingon captains and crews.

The production of the K-30 was halted on Stardate 2/0110 in favor of a newer design. As the K-30s were replaced, they were sold or traded. Of the 244 K-30s built at Taamar, 132 were destroyed, 11 have been captured by Star Fleet, 6 are listed as missing, 51 have been scrapped, 9 have been traded to the Orions and 8 to private interests in the Triangle, and 22 have been sold to private interests in the Triangle and 5 to the Orions.