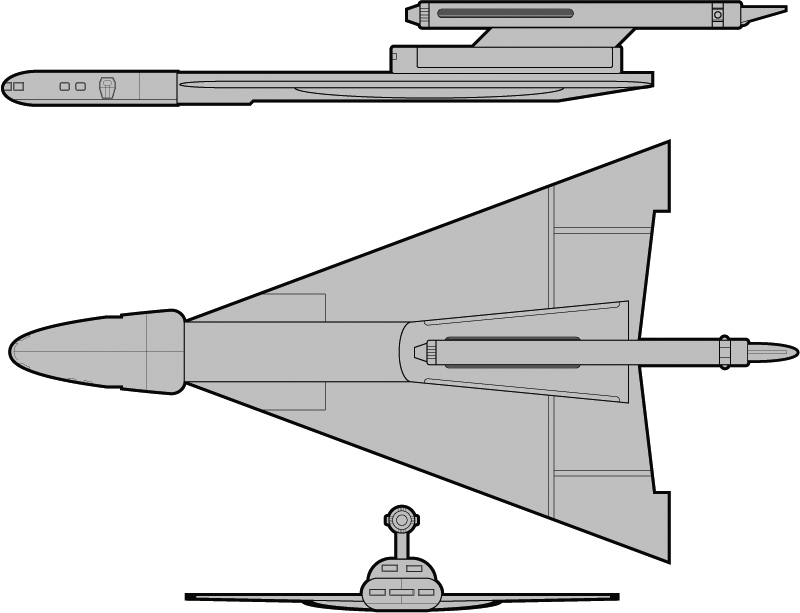 Known Sphere Of Operation:  Orion controled space, Triangle, Outback, Romulan boarder
Data Reliability:  A for A-1, A-2, A-3 model; B for A-4 model; D for A-5 model
Major Data Source:  Orion Sector Intelligence

NOTES:
The ‘Spectre’ is a typical light Orion transport produced at numerous Orion shipyards starting in the late 2230s. Marketed as a ‘clipper’, many corporations and independent operators found this design to be a small, affordable light merchant vessel and passenger transport.

The unarmed A model went into production at the same time as the armed B model in 2239. The A-1 model did not offer the superstructure reinforcement found in the A-2 model primarily as a means of keeping the cost of the Spectre as low as possible. Of course, many of these light, fast Class I ships found their way into the hands of pirates and have operated as such since the introduction of the class. Production of the A and B models ceased in 2285 in favor of the C and D models.

The A-3 and A-4 model started production only five years later in 2244. The unarmed A-3 model and armed A-4 model remain in production as of this day at a number of Orion shipyards. Like the A-1 model, the A-3 model lacks superstructure reinforcement. The A-4 model is the variant most often found operating in pirate enterprises. The A-4 model has proven to be effective as a light gunship in support of larger vessels during raiding operations by various cartels, particularly when used in elements of 3 to 6 vessels. The rare illegal photon torpedo armed A-5 variant of the Spectre appeared in the late 2250s. It is used primarily to supplement firepower in elements of Spectre gunboats in Orion pirate cartel operations. Groups of 3-6 vessels composed solely of this ‘torpedo’ model have been observed operating independently from gunboat variants of the class in operations designed to concentrate firepower on a specific target. The numbers of the A-5’s produced are unknown but are estimated at 20 to 30 vessels.

Exact numbers produced of all models of the Spectre are unknown. Approximately 600 of all models operate under legal registration as of 2295. As many as 100 more may be unregistered.