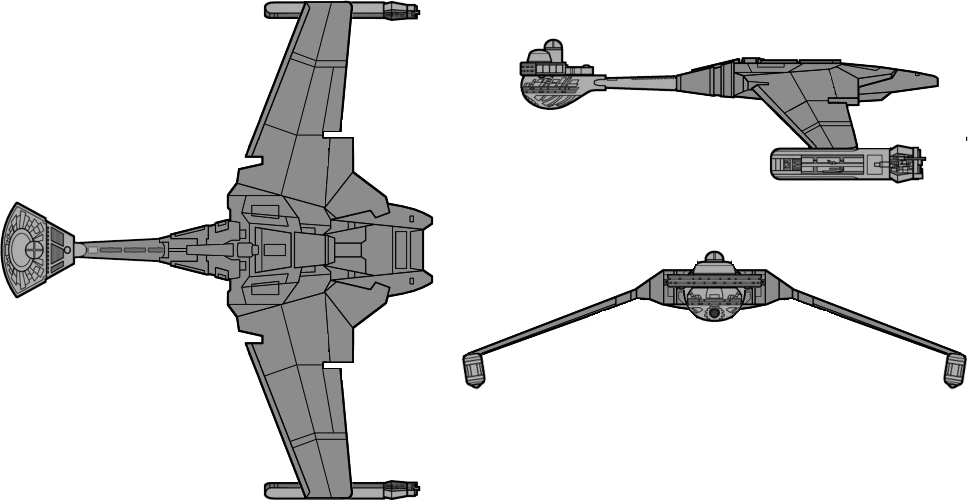 By far one of the most unusual design histories in know space, the I-1 is believed to be the first production vessel to be built independently by the IKS. And yet the Mattarra class is not actually an IKS design – but a modification of a custom built Orion raider.

The I-1 was first conceived after IKS Captain Krelesk encountered an oddly unique design, the Orion raider Mongrel while conducting trade operations with local Orion pirates. It was clear that the Mongrel was a Frankenstein’s hodgepodge of captured Klingon components and what appeared to be the main body of a Romulan V-7. Krelesk was impressed by what he saw and convinced the Orion captain, Drock the Dangerous, for a base schematic of the ship. Fearing that Krelesk would back out of the lucrative trade deal he had brokered, Drock turned over a first draft set of plans for the Mongrel. While it final configuration was quite different from the plans Krelesk took back with him, the simple layout of the vessel would prove easy for the IKS to produce with it limited shipyard capability.
While the shipyards at Mattarra were only 25% complete when the I-1 was first proposed as a production vessel, it was clear to IKS engineers and leadership that, once refined, the ship would be easier to produce that the standard Klingon designs known to the IKS. But at the time, there were not enough skilled engineers to refine the design. To keep production secret from the Empire, the Federation and the Romulans, the IKS secretly contracted for JA Fisher Shiplines to complete the engineering and design schematics. Since Klingon and Romulan designs were commonly copied throughout the Triangle, JA Fisher easily finished the designs with the specs requested. By early 2270, the IKS had the plans back in their hands, and production of the first three hulls was started.

Even as the IKS continued to grow, gaining more members from the Klingon Empire and purchasing various vessels from other governments, the I-1 production was often put on hold in favor of repair to more traditional Klingon vessels. Base components were now being produced, albeit at a limited rate. Yet parts were often used to repair vessels damaged by overzealous ship commanders who raid, while successful, often did not net sufficient resources to counter the damage to their ships. In early 2272, the IKS halted all raiding, and turned their energies to finishing the shipyards at Mattarra and completing the I-1 design.

By late 2273, all three I-1 hulls were finished, and the IKS commissioned all three simultaneously. Immediately released for raiding duty, the I-1’s quickly became a favorite among IKS commanders. The basic A model used the well established KWF-1 drive system which proved easier to produce than the more powerful and larger drives produced within the Empire. The KWF-1 also used the less refined Dilithium that was readily available to the IKS. While fuel consumption was greater, contracts with local Orions meant a fairly steady supply of anti-deuterium. The KIE-2 impulse drive was also deliberately underpowered, allowing for quick and easy mass production. Only the main weapons, the sturdy KD-6’s proved difficult to manufacture. Components were often scavenged from the growing number of non-functioning Klingon ships that the IKS continued to amass. None the less, production continued at a steady pace of three per year until 2277. Even as the IKS began looking to take Gamon or Meadow as their next conquest, IKS officers began to hear rumors of a new Imperial battlecruiser that was quickly becoming the standard in the home Empire. Worried that the IKS may have attracted undue attention, Admiral Kepel ordered an upgrade to the I-1.

The I-1B incorporated KD-8 taken from damaged Klingon vessels to upgun the basic model. The B model also saw incorporation of the KD-7 as a secondary beam weapon system. But the most significant system upgrade was the use of the KSL shielding system. A successful raid by the IKS two year earlier had yielded both generator components and coolant that the IKS needed desperately. In the end, only five fully functioning system could be completed, but the design specs were quickly added to the IKS inventory and the I-1B was soon under construction. While the ‘B’ model, like it predecessor, was extremely powerful, the vessel was crew intensive to build and equally crew intensive to maintain. The IKS had over 100 combat vessels in it’s arsenal, but could only field 40 or so vessels in combat condition. At first the problem was academic, as crews from damaged vessels were used to shore ship personnel. But as time went on, more personnel were needed in the repair yards, as well as the farms and production facilities. The huge crew requirements of the A and B models ensured the I-1 was able to withstand significant combat operations, but pulled vital personnel from the IKS infrastructure. While 40 A models and 20 B models were initially planned for, production halted after 15 A’s and only 3 B’s were completed. Repairs to older vessels again took precedence.

In 2281, after the loss of an I-1a and two of his vital D-18’s, Kepel and members of the IKS High Council ordered construction halted on the IKS drydock at Mattarra and detailed engineers to improve the home squadron of I-1’s. The result was the I-1c. The C model used the KWF-2 warp drive, which was in fact a modified KWF-1. The KWF-2 was more powerful, stable and less fuel intensive. While production time for the warp coils for the KWF-2 was longer, this was offset by the increased power and lower fuel requirements. Also added to the I-1 was the more powerful KD-17 disruptor. Only one set of plans was obtained for the KD-17 initially, but the schematics proved sufficient to allow production within the IKS. In mid-2283, the KD-17’s were tested successfully, and engineers began fitting several systems to three existing I-1a hulls.
Only two of the proposed three I-1c’s would enter service. Drock the Dangerous, who’s own vessel was the inspiration for the I-1, had quickly worn out his welcome among elements of the Orion Syndicate. Proving his cunning, Drock managed to fool nearly everyone into believing he was operating out of the Triangle, near the IKS. While the I-1’s were known raiders within the Triangle, few new their origin, and fewer still that they were actually IKS vessels. Syndicate spies eventually located one of the drydocks where the last I-1c was being produced. Fearing that Drock’s family and the IKS had somehow joined forces, Syndicate leaders launched a suicide attack on the partially finished vessel. While seven raiders were destroyed by IKS forces before reaching the unfinished ship, an eighth did manage to ram the dry dock and destroy the I-1c. Kepel and the IKS never learned the reason why the Orions attacked this shipyard, but extracted a hefty toll from local Orion pirates after the disaster. The Syndicate eventually discovered the ruse and was forced to placate Kepel with ships and slave to stabilize local trade and piracy. The remaining I-1c’s were launched in early 2284 and have become very popular among IKS naval officers.

The IKS is nearing completion of six more drydocks at Mattarra and have recently commissioned two drydocks at K’Linsann. Production of the I-1 and other IKS vessels is expected to increase significantly in the near future. Of the 20 produced, 13 A’s, 3 B’s and 2 C’s are on active duty. One A has been destroyed and one has been sold to the OFMA.

I’ve never been a huge fan of “kit bash” ships, because most LOOK like kit bash ships. But DRock and JAFisher44 have both managed to create a truly nifty concept and a great look from Sub’s many awesome re-draws. Taking DRock’s idea – I though – “what enemy would want to build something like THIS in moderately large numbers”. The IKS seemed the perfect bad-guy for the design. They’d want simple but powerful. And it would allow gamers to switch out the traditional IKS D-7 or D-18 with something that is…well – looks, different. I’m hoping to see more nifty kit-bashes and perhaps some new concepts in the new future.