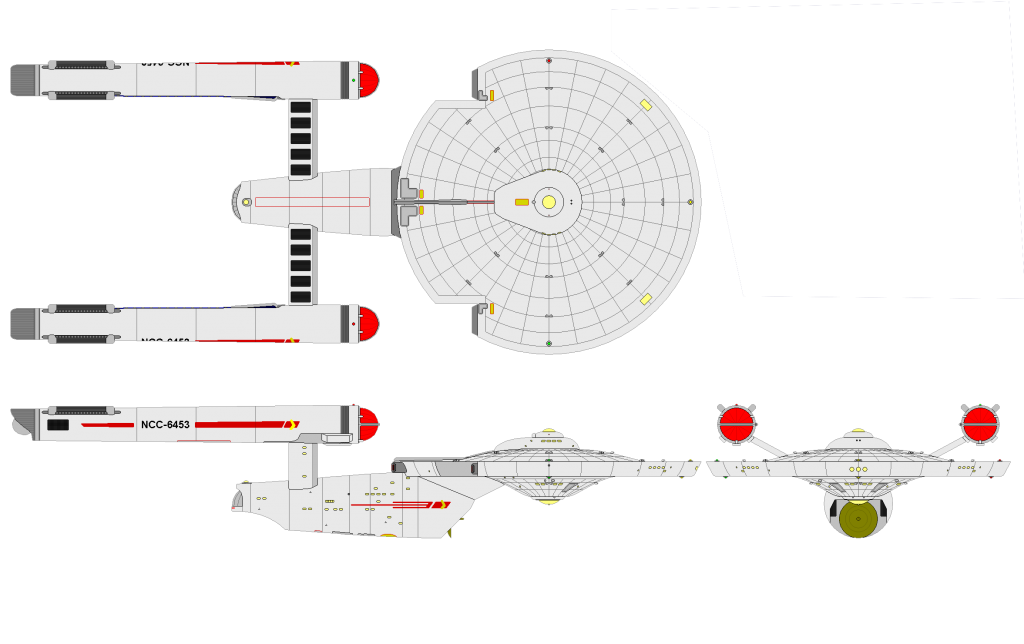 NOTES:
A design variant from Merak Yards, the Franke class was designed, like so many other vessels of the time, to provide the abilities and strength of a full Heavy Cruiser in a smaller and more compact package. The Franke class was reclassified to a fast response cruiser in 2247 as it neared completion. Fleet procurement had requested that a wide range of sub-systems be incorporated that would allow the Franke to quickly respond to phenomenon that were changing quickly and unexpectedly. Unlike other designs, the Franke was equipped with redundancies and isolation protocols that allowed it to observe, close-up, what other cruisers could only observe from a distance.

To ensure power, the Franke was equipped with a unique trinary impulse power system. While this system did reduce overall internal space, each drive was operated separately. Power surges, energy spikes and other EM issues that had been known to knock out impulse drive could now be rendered inert. While some argued that the redundancy was unnecessary, the issue became a moot point when the USS Franke her self was nearly crippled while studying the “star lightning” of Agris VI. This unusual but beautiful phenomenon consist of a massive discharge of “lightning” from the surface to the upper atmosphere. After several days, enough energy is in the stratosphere to send a massive pulse from the planet to a small orbiting moon. The Franke, in low and seeming safe orbit, suddenly found the discharge arcing around the ship. The subsequent energy surge shorted out the primary shields, both warp nacelles and two of the three impulse drive. Fortunately, the Franke was able to break orbit and restart the other engines using it’s functioning drive. After several days, a tender was able to help restore the main warp drives and the Franke returned to it’s observations.

Unfortunately, as with many other vessels of the period, the Franke calls was called upon to participate in the war. The Franke’s additional power and heavy offensive capability meant they were often seen in the front lines of many of the major battles of the Four-Years War. By wars end, three had been lost. Shortly before the end of the conflict, the Mk II was proposed. While the power plant, which had proven successful, remained unchanged, the computer was enlarged and the new Phaser and Photon Torpedo weapon systems were installed. All of the remaining Mk I’s were eventually converted to the Mk II configuration.

The Franke served until the early 2270’s when the decision was made to retire the class as a whole. Of the 29 built, 3 Mk I’s and 1 Mk II were destroyed. 1 Mk I and 2 Mk II’s were scrapped. 2 Mk II’s are in reserve fleets. 20 Mk II’s (including 13 refit Mk I’s) were converted to other classes. The Franke was constructed at the Vulcan and Tellar shipyards.