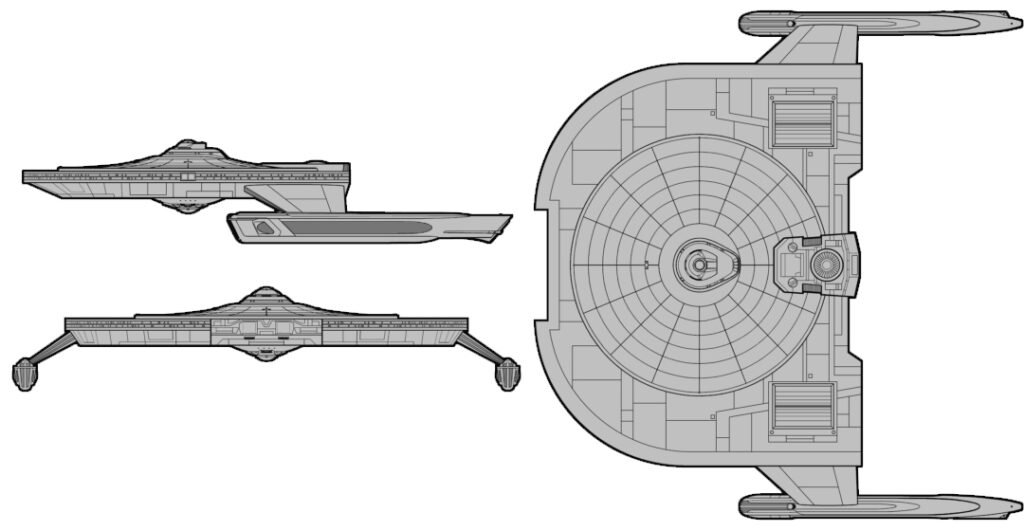 NOTES:
As part of their recent operational expansion, on Stardate 2/2504.06, the Yang/Anders company revealed the result of their procurement nearly three years previously of two Mark I Brenton Class XI Cruisers from Starfleet, stripped of their support, weaponry and defensive capabilities. Classed now as ‘Commercial Transport Cruisers’, they represent a new capability for the long standing commercial concern.

What had followed those purchases had been an interesting conversion refit process. The plan had been to convert them into more modern assets than the Baird class Commercial Escorts that the company has created two decades before from surplus Baton Rouge class cruisers. This has had them create a civilian version of the venerable Ptolemy class Transport/Tug that Starfleet designed during the period known as the “Great Awakening”.

Internally, various larger compartments were converted into cargo bays, expanding the existing cargo bays, which were already linked to the shuttle hangers with their dorsal launch doors. This gives the vessels an expansive modularity function for cargo storage, similar to the main cargo bay of the Enterprise class. The large wide hull of the Brenton class helped ensure this. Support services for many varying types of cargo containers were installed, to ensure maximum flexibility. This was to enable the vessels to serve the needs of various customers who have many different cargo needs.

Externally, whereas the Ptolemy class had one large magnatomic pad at the base of her dorsal strut, carrying the 200 x 40m series of cargo pods, the design for the Brenton class took a more flexible yet complex approach. After extensive research, an intricate system of latches and smaller magnatomic pads was fitted to the aft underside of the wide primary hull. This enabled the class to be able to carry many different cargo pods, modules and pallets types still in use by smaller civilian companies and various members star systems throughout the Federation, as well as the systems and independent nations in the Triangle.

The company also had the venerable FWF-1 warp engines extensively refurbished, and had newer FSL trinary transducer shielding fitted also. For defensive weaponry, the company acquired FL-5 laser banks and FAC-3 accelerator cannons through the Federation Customs and Commerce office at their expanding Tranquillity Station, which enabled Yang/Anders to arm the vessels. The lasers were fitted to provide a 360° coverage (2f, 1a/p, 1a/s), and the two cannons were positioned to fire one each in the fore and aft arcs.

After a two year refit process, beset by many interesting design challenges (including the weapons fitment), and then extensive flight trials, the company revealed to the world the two newly christened vessels, namely YAC-1001 “CSS Anders” and YAC-1002 “CSS Yang”, named after the families of the company owners!

In use, the class will have at least one Baird class Commercial Escort accompany them on all of their journeys.

Yang/Anders see the vessels being used for many years to come, bolstered by the fact the basic spaceframes of the Brenton class are just over a decade old. They have asked Starfleet if they would have the option of first refusal on any more hulls that become available for sale. As well as routine cargo runs to various customers throughout the Triangle, possibly including the newly formed Independent Economic Confederation, the company has already signed a contract with a new colony just being established in the Delta Ranara system near the Federation border, with these new vessels helping transport colony infrastructure equipment.