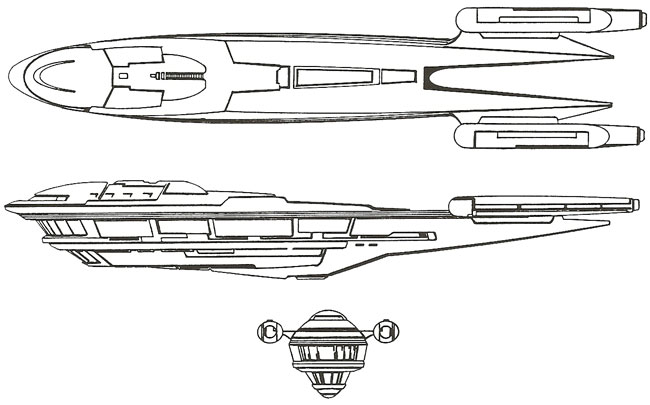 The Eicha freighter is occasionally seen on the spacelanes in and near Orion space and whithin the Triangle. Nart particularly numerous, they tend to be found more frequently in the Triangle than elsewhere.

The cargo capacity of these vessels is quite impressive considering their relatively small size. Ancient and uniqur concepts of starship design enable the Orions to squeeze more space out of what seems like less space. Ton for ton, it is one of the most efficient freighter designs in space.

When fully loaded, an Eicha is capable of sustained operation at Warp 5 and can even “sprint” for short periods of time at Warp 6 without undue strain. In emergencies, its top speed is a healthy Warp 7. These speeds are unusually high for a freighter, and are on of this design’s top selling points.

The A-1 is armed with the type OD-3 Orion disruptor, and for that reason is not allowed within the Federation beacuse it violates the regulation concerning armed merchant vessels. The Orions have in response designed and bult the A-2, identical in all respects to the A-1 but for the total absence of any armament. The A-2 is perfectly legal within the UFP but since it is impossible to tell it from the armed A-1, it hasn’t really made Star Fleet’s job any easier. The mere existence of the A-2, on the other hand, has caused an increase of sales of the A-1 to traders who regularly cross from the Federation to the Triangle, where they must fend off pirates. In typical Orion fashion, uncertainty about wether a particular Eicha is aremd or not intimidates overzealous Star Fleet commanders and pirates alike. Orion buyser in particular like that.

An especially nice feature of the Eicha is the trinary transducer shield generator, a highly efficient deflector system usally found only on warships or much larger vessels of the major spacefaring powers. Four Eichar A-2’s are owned and operated by Chis Cheks Limited between their main facility on Rhea and their subsidiaries on Moscowitz and Pippin. For more detailed information on these freighter, including specifications, standard modifications, performance records and a free buyer’s prospectus, contact: