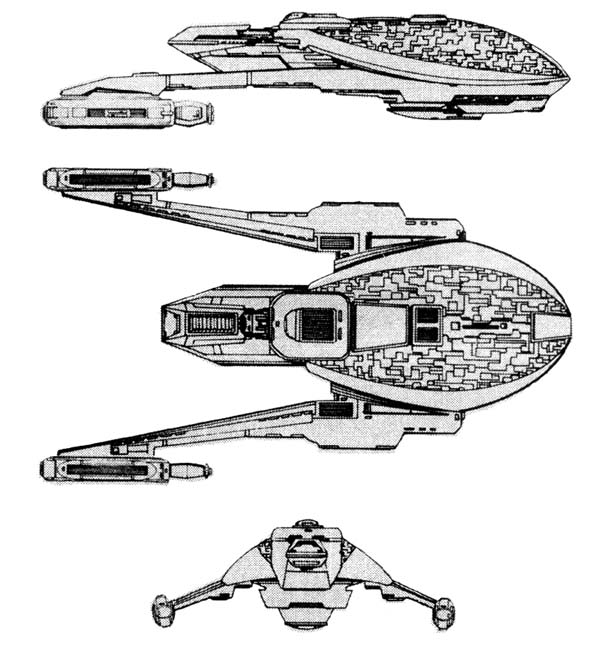 NOTES:
The T-12 is the largest assault ship in the Klingon Navy. With the capability of putting its entire contingent of troops and vehicles on the ground in less than 15 minutes, this vessel is one of the most respected in known space. Its ability to beam down a total of 2,400 troops, 56 light support vehicles, and 28 heavy tanks in such a short period of time makes it very difficult for any enemy to repel this force. In most assault operations, these ships are used in groups of 3, the number of groups depending on the complexity of the operation.

The largest number of these vessels used in a single operation was on Stardate 2/2003 when the Klingons invaded and captured Mrzicann, a small world outside the Organian Treaty Zone. In this campaign, 24 T-12’s beamed their troops and material onto the planet’s surface with such speed and precision that the defenders were compelled to surrender in less than twelve hours. Mrzicann’s standing army of 800,000 troops was overwhelmed by the element of surprise and, in most cases, gave up without a fight. To prevent a repeat of this occurrence, Star Fleet has stepped up its monitoring of these vessels, keeping track of their location and movements.

The T-12 is capable of traveling at a sustained speed of Warp 7, allowing it to be an integral part of any invading force. Due to the nature of its mission, the T-12 has better engine shielding than most Klingon vessels. This added shielding protects the troops from being overexposed to the radiation emitted by the warp and impulse systems.

The T-12A carried an impressive array of eight disruptors, and so it seemed that these ships could stand and fight with most any warship of the time. On closer examination, however, the range limitations of the KD-11 made it obvious that the weapons were only for close-in support. The A model remained in general production until 2287 when it was replaced with the B model. Of the 102 T-12As built, 88 were refit to Bs, 2 were used by the Imperial Marine Training Command until being placed in reserve fleets in 2298, and 12 have been destroyed.

The B model saw the addition of a forward torpedo that gave the T-12 extra firepower while in combat. Several internal systems were also refit, including the main transporters. However, the overall service parameters remained unchanged. A total of 88 T-12Bs were built before production abruptly halted due to the Praxis disaster. Of the total 176 Bs fielded, 6 were destroyed, 5 were scrapped and 50 were placed in reserve fleets. 115 were refit to C models.

The C model saw the first real upgrade to the T-12 with the increase of the impulse drive and upgrades to the main distruptors and shields. The C was considered capable of defending it self against most low to mid range craft, but was still considered slow and un-maneuverable when fully loaded. Production of the C model was severely limited due to reduced capabilities of the Empire following the Praxis disaster. Only 57 new hulls were built before production of the T-12 was again halted in 2311. Combined with the 115 refit Bs, a total of 172 Cs saw service with the fleet. 4 were destroyed, 8 were scrapped and 20 were placed in reserve fleet.

By 2330, the T-12 had begun to be placed in reserve fleet en-mass. However, several ship designers found a way to incorporate updated 3rd and 4th generation versions of the established on-board equipment without the need for major overhauls. In 2334, plans were approved to upgrade the T-12 to the D model.

The T-12D saw the enlargement of the main computer along with an enlargement of the primary impulse drive. The secondary equipment on the warp drives was replaced, although the main warp coils remained untouched. The transporters were also refit along with the main shield generators. A total of 140 T-12Ds were eventually fielded, all converted C models. 9 were destroyed, 13 have been scrapped, and 2 have been captured. 20 are used as training vessels. 91 were converted to E models.

In late 2365, Klingon designers realized that a major overhaul to the now aged T-12 would be necessary to continue the operational capabilities of the 100 year old design. While many vessels still in service had few original components or hull material left on board, a number of systems would need to be overhauled if the T-12 was to remain in service. Drell themselves accepted the challenge and within three years had a proposal for efficient and timely overhauls of the T-12. The E model was officially adopted in 2364 and the first ships were overhauled the following year. While replacing aged decking and hull supports, the main computer was switched to the far more efficient ZI-2. The E model also mounted the extremely powerful KSNA shield system, doubling the effective shield power of the class.

The upgrades and overhaul of the E models was both efficient and quick. By 2370, all D models had been refit to E models. The T-12E saw action throughout the Dominion war and played a vital role in the rapid establishment of Klingon outposts and operational bases during the conflict. Of the 91 T-12E’s fielded, nearly all saw operations during the war. 4 were destroyed and 5 were scrapped after receiving battle damage. Despite their age, 82 T-12E’s remain in service – although most are scheduled to be retired within the next three years.

The T-12 was produced at Fonawl, Iosia, and Mustaka, with a peak combined production rate of 14 per year.

The class is named from the Klingon na ra’den, a typical reference to the strike force it can deliver so rapidly.