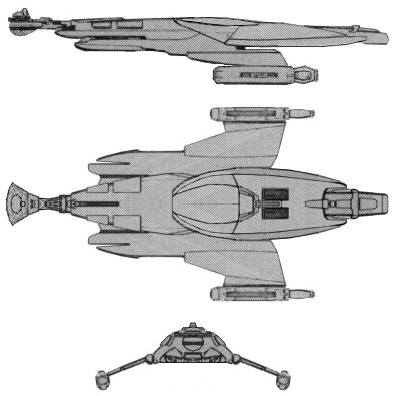 NOTES:
One of the largest and deadliest ships fielded by the Klingon Empire, the L-28 was originally planned as a large troop carrier, but was redesigned in mid-2253 even as construction was beginning. After the battle of Joia V, military leaders realized that a swift victory over the Federation and her allies was becoming less likely. While the Empire continued to make inroads into the Federation and win individual battles, the cost was quickly becoming a concern. Ship losses against what were initially thought to be inferior Federation design were mounting, with victories coming at the cost of 2 and 3 Klingon vessels to each Federation ship destroyed.

To counter this, the L-28A was launched in late 2253. Extremely resource intensive, the L-28 used the latest in Klingon technology and weaponry to create true parity with the largest Federation ships of the time. The L-28A was not noted for it’s maneuverability, but was designed to withstand multiple hits from enemy cruisers and still return a devastating blow. Nine KD-6’s gave the L-28A a particularly vicious attack that could easily break through Federation shields and deliver a knockout blow.

More interesting, though, was the used of the KP-2 torpedo system mounted in a dual launcher. Unlike many ships in service during this period, the L-28 used the main torpedo system to great effect, outgunning even the Federations powerful Heston class heavy cruiser. The L-28 would go on to win nearly every engagement it participated in during the war. However, repairs required lengthy dry-dock periods and were difficult to conduct in the field. During the last battle of the war, all six L-28A’s were in dry-dock and unable to participate.

Following the war, the L-28As were relaunched and placed on front-line patrol duty near Romulan space. For the next 15 years, the L-28 conducted patrols and attacked Romulan interests in and around the Triangle. In 2271, with the sudden relaunch and success of the Enterprise class, the Empire scrambled to launch vessels that could counter the infamous ship. With a number of other ships nearly as powerful and successful as the Enterprise class, the L-28 was soon recalled and a major overhaul was ordered.

The L-28B would see significant improvements in nearly every on-board system. An enlarged computer, heavier weapons and more efficient shield system made the L-28B the equal of most Federation and Romulan vessels of the day.

However, the L-28B was still an extremely renounce intensive vessel to field. It’s large crew and troop compliment meant the ship could only serve for 8 month tours before being resupplied. In the later 2270’s the Empire quickly became aware that it’s spin-ward expansion had brought it into conflict with the Cardassians. While this new enemy was technologically equal to the Klingons, the shear distance from the home-world and resource needed to prosecute a war meant a lengthy conflict indeed. The empire’s continued shipbuilding and colonization effort meant an even greater need for raw materials and resources.

Plans for yet another conflict with the Federation – later known as the Taal Tan offensive, included use of the L-28 as a major front-line combat craft. One L-28 was equipped with a Romulan Plasma Bold in the hopes that it would be effective against Federation orbital stations. This L-28C never saw combat, with the Taal Tan offensive ending shortly before the L-28C arrived on station.

As the 2280’s came to a close and the last decade of the 23rd century began, the Klingon Empire found itself nearing collapse. The Empire was hemmed in on one side by the Federation, the Romulan Star Empire on another, and the Kinshaya forming an ongoing barrier to expansion. Efforts to expand spin-ward were proving disappointing, with the Cardassians continuing to be a thorn in the Empire’s side. The spin-ward expansion region proved nearly as resource poor as the currently held territory. The axiom “nel komerex, khestrerex” (that which does not grow, dies) looked to be increasingly prophetic. War, the traditional Klingon response to such circumstances, was once again becoming and imperative.

The L-28D was designed to improve on the initial performance of the L-24 Ever Victorious and the L-26 Blockader classes. The colossus continued it’s design philosophy as a heavily-armed, well protected engine of destruction. The main propulsion was upgraded to the new KWG-2 warp drive and used in conjunction with the KIG-1 impulse engine, providing the ship ample power and respectable maneuverability. The main weapons were upgraded to the KD-17 disruptor and four KP-8 photon torpedoes, making the L-28D the most offensively powerful design the Empire had produced to date. The crew was increased to 720 although the 250 troops were retained.

All six L-28s were upgraded between 2290 and 2292. Production of 10 new L-28s had been schedule to commence the week after the destruction of Praxis, an event that would result in a rapprochement between the Empire and it’s long-time adversaries. After the signing of the First Khitomer Accords, further production and development of the L-28 was discontinued. All six L-28’s were eventually placed in reserve fleets, with the last L-28D retired in late 2313.

Although plans were put forward to quickly upgrade the L-28 during the Dominion War, only two were reactivated and used for patrol duty deep within the empire. Neither saw combat during the war and both were returned to reserve status after the war’s conclusion. The L-28 was built at Komo Val. All upgrades were performed at the Quronos Shipyard.