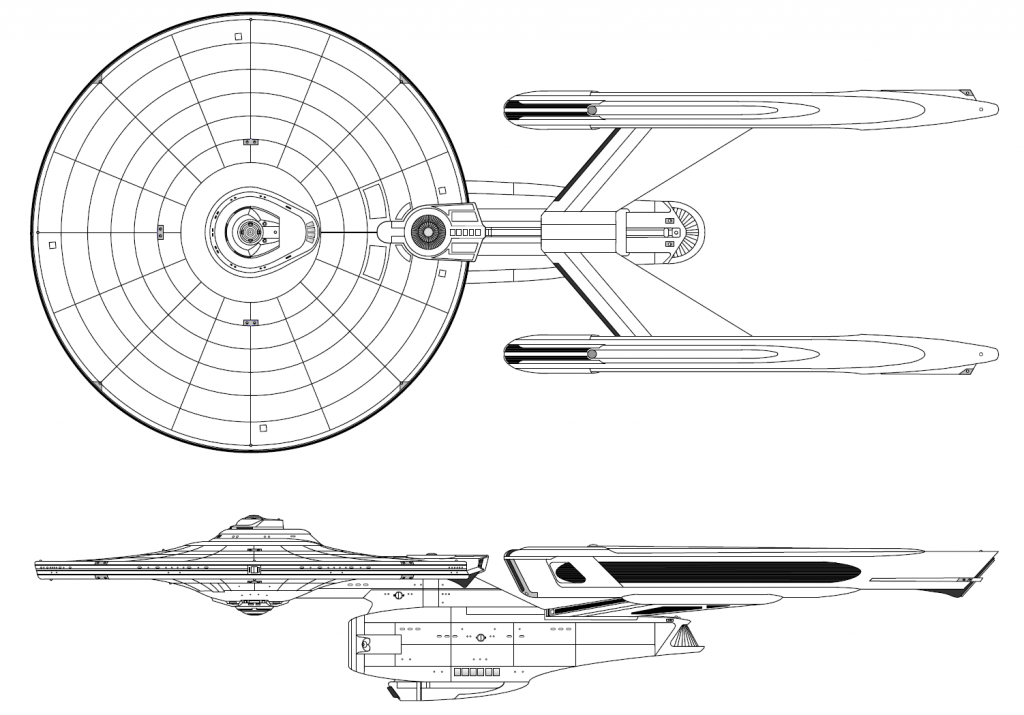 NOTES:
Traditionally Starfleet’s main focus has always been on heavy cruiser construction for it’s exploration and cruiser force. Building and maintaining these starships cost the Federation much in resources. As a part of a new design mandate, Starfleet sent out design parameters to the leading starship construction companies for a medium cruiser capable of performing the exploration roles of the heavy and exploratory cruisers, long patrols without support, and yet be cost effective. This call was answered by Ishikawajima Harima Industries with the Mogami class cruiser.

The Mogami class ships served Starfleet well upon entering service in 2277. Mk I’s became a standard fixture operating in the Triangle region with a few of them operating on the rim of Federation space shortly after their introduction. The most famous was the USS Kumano and her legendary Triangle patrols near the Imperial Klingon States.

USS Kumano under the command of Isamu Hitomi spent most of their short careers patrolling this region of the Triangle in an effort to keep the IKS in check. Just like the ancient Earth surface vessel that this starship bears its name from, has cheated death with a tenacity that is truly admirable, indeed almost miraculous. The USS Kumano had survived many close encounters and earned the nick name of “Starship of Nine Lives.”

Ultimately in early 2285 the USS Kumano and crew meet their end while defending a convoy from IKS vessels on a raiding mission to capture a classified cargo being transported from Colil V to Starbase 10. As the freighter and four destroyer escorts escaped at full speed to Federation space, the USS Kumano and her sister ship the USS Mikuma intercepted the approaching IKS attack group. In the resulting battle they successfully stopped the IKS advance, but both Federation ships were lost with all hands. Details of this battle remain classified due to the nature of the mission.

After the investigation into the loss of the USS Kumano and Mikuma was completed, Starfleet command reviewed the report and decided an upgrade was need to the Mogami design. In order to keep it cost effective, the Mk II’s only received new beam weapons and impulse engines. Most were upgraded at smaller ship yards near or in their assigned patrol areas. On average, most upgrades were completed within 6 months due to the nature of the modifications and original design of the ships allows for easy upgrades.

Early in 2297 a proposal for the Mk III upgraded was submitted and approved. It included the same cost effective parameters as the MK II upgrade by keeping it limited to beam weapons and impulse engines. This version served Starfleet well until the Mogami class was retired in 2312. Shortly after retirement, 12 of the ships were sold to the Affiliation of Outer Free Worlds in 2314