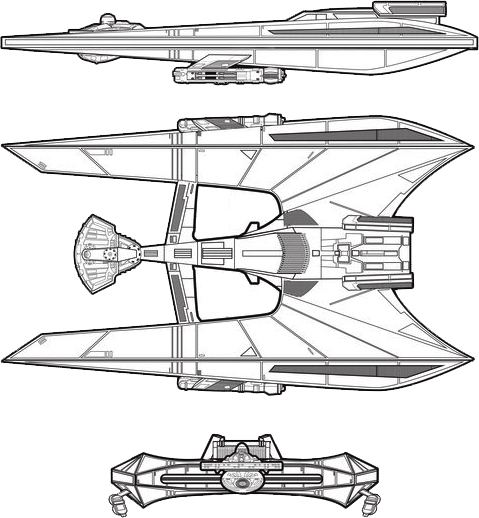 NOTES:
Like many other “purchased” vessels, the V-201 is not popular among it commander and crew. Although a powerful combat craft, many Romulans still see this ship as an enemy vessel. None the less, the V-201 is a capable combat craft and easily outperforms the equally unpopular V-11.

The Type 1 was constructed from 22 ‘a’ and ‘b’ models of the heavily armored D-101 cruiser. The original shipment of both models were not sent striped of equipment, much of which the Klingon considered obsolete at the time. This slowed refit and relaunch times by several months as Romulan engineers were forced to remove a number of Klingon systems that were incompatible with Romulan equipment. In the end, only the primary warp drive and power plant were retained. Even the Klingon impulse drive was removed and upgraded; designers also installed a torpedo launcher, giving the V-201 a wider range of combat options. The Type 1 served for nearly 15 years along the Triangle boarder, countering the Klingons continuing aggression in the region.

In 2283, the V-201 was recalled and refit for service directly against the Klingons. Despite the common enemy of the Federation, animosity between the Klingons and Romulans was too great and relation continued to deteriorate. The Star Empire was still outnumbered by the Klingons and could not afford to waste their resources. Along with dozens of other purchased ships, the V-201 had their weapon systems upgraded as well as installation of new shield and a larger impulse drive. This gave the heavily armored cruiser the ability to fight directly against their Klingon counterparts, and several head-to-head engagements between V-201’s and Klingon D-101 resulted in Romulan victories.

The destruction of Praxis and sudden shift of Klignon resources from the Federation boarder to the Romulan front forced the Star Navy to increase it resources along the Klingon boarder. While the V-201 was scheduled to be retired and scrapped in 2292, the need for ships was far to great and the V-201 was again updated. The Type 3 was also used against the Gorn, with six of the older ships now detailed to that boarder. The Type 3 would also see limited action in the Tomed conflict.

By 2315, most V-201’s were being used as support vessels with many operating with reduced crews and limited supplies. Most would remain understaffed well into the 2340’s until the Type 4 was announced in 2346. By the later 2330, many engineers serving onboard the V-201’s had complained the the Klingon warp engines were simply too old to be refurbished. While some called for the vessel to be retired, older RWD-2 warp drives were fitted to the V-201 and the vessel returned to service in 2348. The V-201 would continue to serve along the Kingon-Romulan war zone until 2355 when the last ship was damaged beyond repair and retired.