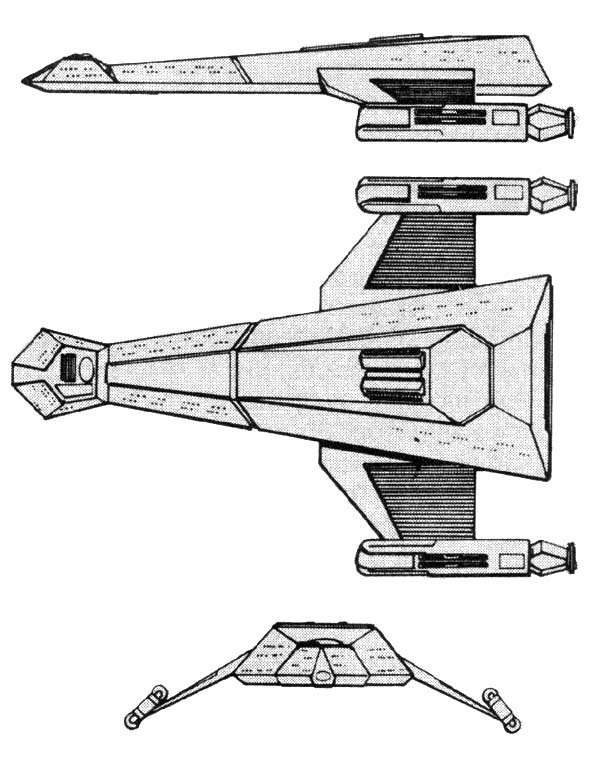 NOTES:
As the Four Years War dragged on and the Klingon lines of supply grew longer, it became apparent to the Klingon Imperial Command that ships designed to perform escort duties were needed. This need had been foreseen when the war was in its planning stages, but the tenacity of Star Fleet was unexpected as the Klingons had never fought a protracted war. The shortage of combat vessels at the front would only permit the Klingons to detail lone destroyers as escorts, but as the raids mounted, the High Command began pulling more and more ships from the front to protect the much-needed supplies. By Stardate 1/97, the advances into Federation territory had stalled, and the K-23 was put into production to end the impasse.

When the K-23, perhaps the most deadly escort vessel in known space, was commissioned into service in 1/9702, its appearance seemed to signify an end to a Klingon tradition in ship design. Earlier designs were a blend of rounded surfaces ending in sharp lines, and the K-23 was a wedge of angular, flat surfaces with no boom or command pod, and no large main hull flying along behind.

The most notable reason for the change in design concept had to do with the war against the Federation. The first and foremost of these was the confusion factor. The Klingons decided to begin a propaganda war against the UFP, and the K-23 was to play a key role. Its angular design would not be readily identifiable as Klingon, and the confusion sowed by this uncertainty could only benefit the Klingon cause. The Klingons started rumors about having an unknown ally, and supported this propaganda by crewing the first K-23s operating in the war zone with Romulan-fusion Klingons. So complete was this ruse that the crew members were trained in a battle-language known only to themselves. These hand-picked crews had orders that they were never to be taken prisoners nor was their ship ever to fall into enemy hands, tactics that were to give the class its name (from the Klingon talat khexesta).

The decision to mount the KWC-1 warp drive system on the earliest K-23s produced was one of economics. Though the original plans for the K- 23 called for the more powerful KWD-1 system, not only was the KWC cheaper but it was being produced at the same shipyards as the K-23. This savings in time and money would cost the vessels some of their maneuverability, but, in the Klingon mind, this was a favorable trade-off for being able to produce ship’s rapidly enough to continue the offensive against the Federation. Even so, the K-23A could cruise at Warp 7, fast enough for the ships to shuttle between convoys traveling at Warp 6 and provide them more protection. The early-model vessels mounted three KD-4 disruptors, each with independent fire control stations, giving them the ability to deliver a more destructive blow than most of the vessels in Star Fleet.

Of the 186 K-23As built, 129 have been converted to Bs, 54 have been destroyed, and 3 have been captured by Star Fleet. Production of the K-23A was halted shortly after the war in response to an Imperial Command order that shipyards would begin producing major components required for the vessels made at their facilities. The result of this order was the K-23B.

The KWD-1 warp drive system mounted on the K-23B delivers more power at the same efficiency rating. Though it is only capable of cruising at Warp 6, the reduction in cruising speed did not effect maneuverability. An improved shield generator also was installed, with the KSI shielding system deliver more protection.

The K-23D was introduced on Stardate 2/1403 with the commissioning of 33 converted B models and 4 newly-built ships. The new model was given a more efficient shield generator, though it actually delivered less protection to any one area. The superstructure was strengthened, and the addition of the KD-13 disruptor increased the offensive range by 120% and the destructive power by 25%. This increase in firepower seems impressive but, in light of existing phaser technology, the K-23D is actually under-gunned. With only one of its three disruptors able to fire at 220,000 km and the other two at 100,000 km, the escorts are not able to defend against larger vessels that can stand off at extreme range and deliver multiple blows. This shortcoming has been overcome by increasing the number of vessels escorting a convoy.

Of the 416 K-23Ds built, 322 remain in active service, 24 are in reserve fleets, 4 are used as training vessels, 47 have been destroyed, 5 have been captured (3 by the Romulans and 2 by Star Fleet), 6 are listed as missing, 3 have been scrapped, 2 have been traded to private interests in the Triangle, and 3 have been sold to prominent families within the Empire. Since the introduction of the vessel, the shipyards at Taamar and losia have been producing K-23Ds at an approximate rate of 14 per year.
Soon after the K-23D entered service, the K-23E was introduced with all disruptors upgraded to the KD-13, giving the ships the ability to engage their targets at extended ranges. Even with this increase in offensive range, the K-23s are still found in large groups. The escorts usually operate in flights of three, and one flight will be dispatched with every group of nine transports or freighters. During the Four YearsWar,the practice had been one escort per nine ships.

Of the 166 K-23Es built, 139 remain in active service, 19 have been destroyed, 3 are listed as missing, 1 has been traded to the Orions, and 4 are in the service of ranking families of the Empire. They are being produced at the facilities of Taamar, losia, and H’renn at an approximate rate of 20 per year.

The K-23F, never directly encountered by Star Fleet, is reported to use the KID-2 impulse drive system and to mount six KD-9 disruptors with fields of fire that include the aft sector. The new weapon arrangement is said to be easily identified by the large, ball-mounted disrupter emplacement on the underside of the bridge and amidships. The K-23F also reportedly has a strengthened superstructure and a more efficient shielding system as well. Ship data experts feel the increased abilities of the K-23 have made it a most dangerous foe.

The K-23F is rarely seen along Federation borders or in the Triangle. Of the about 100 K-23Fs thought to have been built, approximately 80 remain in active service. The disposition of the remaining vessels is unknown at the time of this printing. Intelligence data gathered by Operation Dixie suggests that these vessels are being used along the Klingon coreward borders. The entire complement of vessels con- structed at H’renn and losia have been sent to this area, though it appears that only half of those produced at Taamar have been sent coreward. This would account for the limited number sighted by Star Fleet and the Romulans.