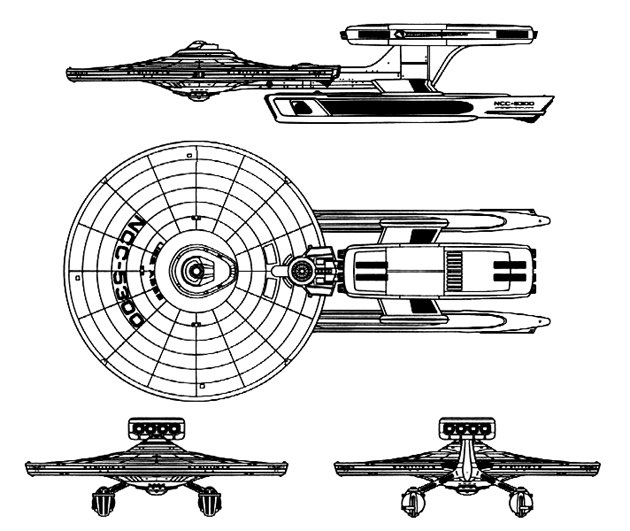 NOTES:
Shortly after the launch of the Andor missile Cruiser, Star Fleet felt a larger and more powerful craft could be constructed to increase the combat capability of the photon torpedo. Dozens of designs were considered, and at first, the Cassard Class was the most logical upgrade. But the inherent nature of photo exhaust and the unusual reaction between launched torpedoes and the warp drive, especially while at high warp speeds, necessitated the moving of the torpedo system. As more and more modular and mission specific ships were created, the Sol III Baltic yards, in a joint effort with Choikis design bureau created and launched the Abbe Class.

Almost immediately, the potential of the Abbe was apparent. Larger than other missile oriented ships, the Abbe was more powerful, faster and capable of reacting with other first response units. By 2273, production had begun, and one year later, the class would proved itself. While patrolling near the Orion boarder, the USS Milliam (NCC 5303) encountered four pirate vessels en-rout to an unknown base within the Orion space. After challenging the Orion pirate vessels, the Milliam was jumped by a Orion bought Klingon D-7. Believing they had the advantage, all five vessels attacked the Milliam. With deft maneuvering, the Milliam dodged the smaller pirate ships and attacked the D-7. Firing volley after volley of torpedoes, while still holding off the other, more maneuverable Blockade Runners with her heavy Phasers. The D-7, realizing it was outgunned, attempted to disengage from the battle. The captain of the Milliam, having no intention of allowing the criminals to escape, pursued, followed by the smaller Orion pirate vessels. Totally catching the Orions off guard, the Milliam’s forward and aft torpedo bays were able to destroy one Lightning and damage two others. The Milliam was forced to break off to lend assistance to one of the crippled Orion Lightnings after they lost life support. Capturing nearly 100 pirates and two ships, the Milliam suffered only minor damage and was back on patrol in less than two days.

The initial success of the Abbe, while notable, did point out the moderate phaser capabilities of the craft, and on 2276, the Mk II was first tested. Increasing the impulse power of the ship, as well as improving the phaser’s offensive capabilities, the Mk II remained unchanged for 8 years, serving with distinction until 2284, when the Mk III was launched. The Mk III was the first upgrade to the torpedo targeting system. The new Loraxial Defense Industries FP-4 lunch system allowed each torpedo to be programmed individually, giving the Abbe more flexibility and offensive capability. Coupled with a shield and computer upgrade, the Mk III would not be upgraded until 2297, when the advances in warp technology saw the improvement of the FWG drive to the FWL, giving the Mk IV a better response time and high warp pursuit capabilities. Increases in torpedo weaponry and computer power combined to create the most dangerous variant of the popular destroyer.

By 2340, the Abbe class was over 60 years old, and many vessels were being considered for retirement. Refitting of the of the popular vessel was believed to be excessively costly, and the 21 active Abbes, now relegated to secondary fleet duty, were scheduled for retirement within 10 years. The original designers at Biraktes quickly fielded a proposal to upgrade and modernize the aged destroyers. While designers claimed they could refit the vessels for 1/4 of the initial upgrade proposal, many in Fleet procurement were skeptical. None the less, the Abbe was scheduled to refit, and in 2342, the first vessel was recommissioned. Although outward appearances were unchanged, internally, the Abbe was a new vessel. An isolinear computer replaced the “M” series computer, which allowed radical improvement to nearly every onboard system. A more powerful impulse drive was installed, as was a stronger shield system. But the improved primary phasers quickly became the standard for other destroyer upgrades. The new FNH-9 nearly doubled the overall firepower of the primary phasers. The Abbe could now easily engage most known enemy vessels with a high degree of survivability.

None the less, the political instability of the late 2350’s and early 2360’s prompted the launch of the Mk VI. Finally commissioned in 2368, the Mk VI replaced the well worn FWG-1 drive with the much newer and more easily maintained FNWD series of warp drive. A more powerful impulse drive and heavier weapons continued the tradition of a powerful first strike which was the hallmark of the Abbe class. The installation of the extremely efficient and powerful FNSR shield system allowed the Abbe to engage event the most powerful of Romulan and eventually Cardassian vessels. While the FNSR had to be custom fit to the Abbe’s smaller hull, it’s installation allowed all 8 Abbes that eventually fought in the Dominion war to survive their various encounters. While most Abbe’s could be considered well past their prime, Star Fleet maintains the fleet, most of whom components are new. The Abbe class is expected to continue to serve will into the 2380’s.

The Abbe was produced at the Wall Bradilajia Dry-dock and the Biraktes Shipyards Inkestra III Primary Construction Docks at a combined rate of 2 per year. Refits were initiated at various dry-docks throughout the Federation. Of the 21 Abbes built, only one has been lost in over 80 years. The remaining 20 vessels are still in active service.