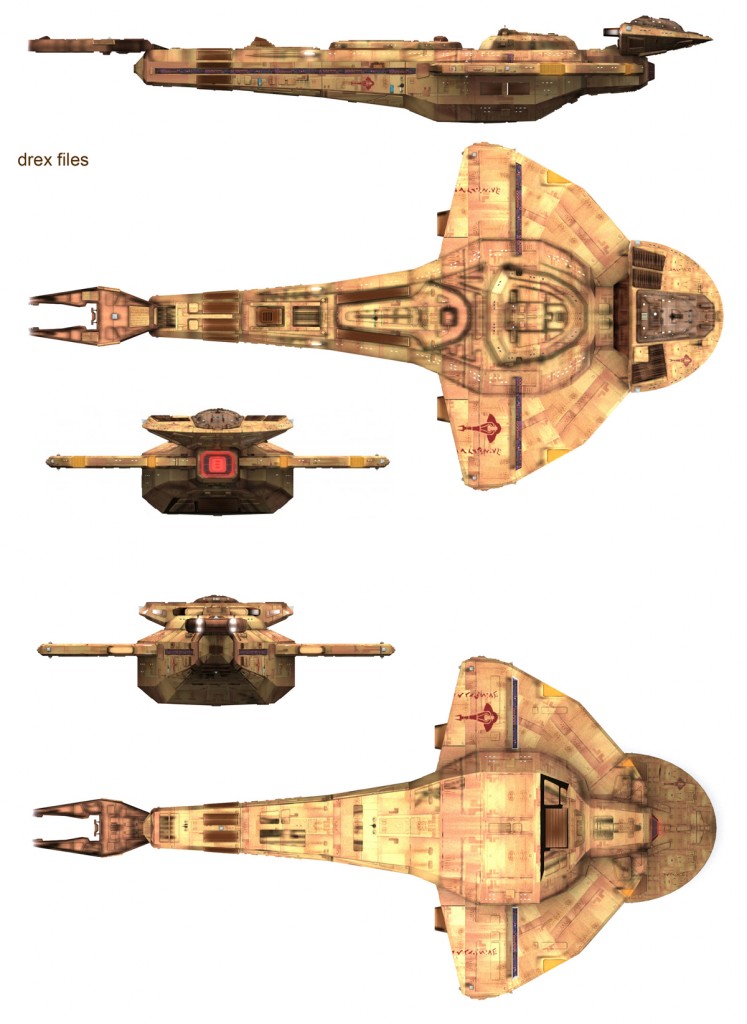 from Paramount – design by Rick Sternbach

Notes:
The Galor class has become one of the most long-lived and well-loved designs found throughout the Cardassian Union. Sturdy, capable, inexpensive and easily mass-produced, the basic Galor design incorporates successful subsystems and design elements from previous vessels while also introducing new systems and construction philosophies that have made it the major backbone of the Cardassian fleet since it’s introduction.

The basic Galor was in fact the product of a nearly 20-years long design project. The concept was first proposed in the late 2280’s, with designers charged with balancing combat capability and resource management far in excess of any previous designs. A number of specialized subsystems were developed as well as new power transfer systems and computer controls. Lessons learned during the numerous conflicts with its neighbors lead the Cardassians to harden a number of onboard systems, giving the initial design significant robustness when in combat.
Officially adopted into the fleet in 2310, the Galor was already well into wide-scale production by the time the first ships were commissioned. The Type-1 used the CO-6a as it’s main computer system. This allowed the installation of a staggering 16 separate beam-weapon emplacements, giving the Galor unsurpassed firepower. The forward and aft disruptor banks allowed the concentration of significant firepower during strafing runs. Only the primary shields were considered underpowered at the time of launch. However, the Galors rarely operated alone, giving commanders the ability to englobe and enemy, reducing their ability to concentrate their firepower.

The Galor also served as the Cardassian Unions prime research vessel. With 8 onboard labs, the warship was able to explore and research well beyond the established worlds of the Union. Discovery of new resources was often the primary goal of missions assigned to the ever growing number of Galor class vessels. But the Galor class was not without it’s faults. The Type-1 Galor, as with most Cardassian vessels, suffered from sensor difficulties with reduced range and accuracy a common problem. While combat sensors were accurate, other sensor systems proved less accurate and required the vessel to close with their intended targets to get truly accurate reading.

The Type-2 would see a significant gain in power with the introduction of the CWK-1 warp drive as the primary power system. The Type-2 saw the replacement of the duotronic style computer with the more mainstream Isolinear system. This allowed the introduction of better weapon power transfer subsystems and the installation of the CSD-4 spiral wave disruptor. It would be the installation of the vastly superior CSO main shield system that would make the Type-2 the envy of frontline commanders. Unfortunately for the Union, the Type-2 was far more difficult to build, increasing construction times by nearly 8 months. Even with conscripted labor, the additional delays and constant material shortages meant that the production run of the Type-2 was far reduced when compared to the original Type-1.

The Type-3 would be introduced in 2346 and is still considered the best version of the Galor to date. The Type-3 saw the introduction of several streamlining procedures that allowed the unprecedented decision to retrofit older Type-1s to the new Type-3 configuration. Cardassian naval procurement held that most vessels were not refit but were allowed to serve their term and then were placed in reserve fleet. The popularity and need of the Galor saw a large scale upgrade program initiated the following year.

The Type-3 incorporated the improved CI-4 as well as the more powerful CP-6 torpedo. The Type-3 would not be the most powerful, but was considered the most efficient and balanced version. Cheep enough to mass produce yet capable enough to remain the primary combat vessel of the Union, the Type-3 served will into the Dominion War and remain in active service despite it’s age.

The Type-4 was the first of two attempts to produce a more powerful version of the Galor to counter the increased technological superiority of the Federation. The Type-4 saw the inclusion of the CWK-2 warp coils installed in the wings as well as the significantly more powerful CSW shielding system. But the new design saw only a minor improvement over the Type-3. Production was scheduled to be reduced, but was secretly maintained by the Obsidian Order who contracted for 100 of the more powerful variants. A number of these were later lost in a disastrous attack on the Founder Home-world some 20 years later.

The heavy losses of the Dominion War and the destruction of several major shipyard before the end of hostilities has reduced production of the Galor to less than 5 vessels per year. With nearly 80% of all available resources going to rebuild the staggering losses of the war, little if left for the military budget. Fortunately for the Cardassians, none of their immediate neighbors have significant fleets to pose a threat.