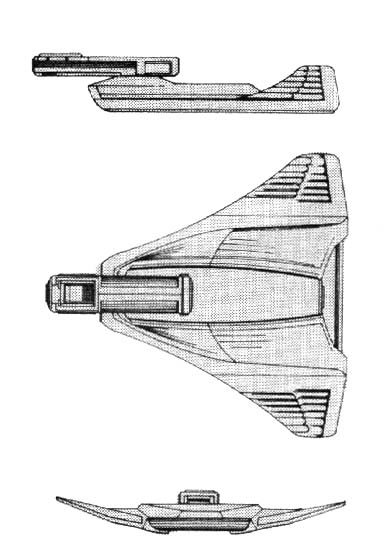 NOTES:
The ships in this class were used for long-range courier missions for many years. Carrying light armament, they were used extensively along the Federation borders and in the Triangle. Because they can sustain Warp 7 speeds, they have been used as V.I.P. transport throughout the Empire.

About Stardate 1/8608, the CS-2 Type-2 was introduced into service to replace the Type-1; though quite suitable for its role, its weapons systems were light, a trend that continued until the introduction of the Type-6 about Stardate 1/9804. This newer model carried an upgraded beam weapon and mounted a more powerful engine; existing vessels of Type-2 through 5 were not refitted, but were relegated to duties within the Empire. Types-7 through 9 showed cosmetic changes to the Type-6, but about Stardate 2/0510, the Type-10 was introduced with new-style shields and more powerful weapons and engines. Vessels in this class were put into the reserve fleets about Stardate 2/14.

Of the approximately 300 built, about 150 currently serve in the reserve fleet. It is known that at least 90 have been sold to the private sector; one Type-5, one Type-7, and one Type-10 operate exclusively within the Triangle.

Named for the Romulan verelan vastarum (graceful flyer), a Romulan bird know for its ability to glide gracefully for hours at a time, these ships are common along the borders of the Empire, though they normally are not involved in military missions.