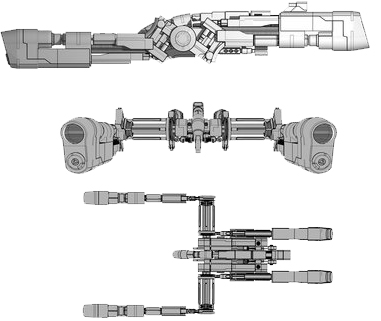 Known sphere Of Operation: Open Space
Data Reliability: A for A-1 and A-2 model.
Major Data Source: Orion Sector Intelligence

NOTES:
The Baldain class of large shuttle is one of the oldest designs currently in use within the Orion sphere of influence. Little better than large attack fighters, the Baldain is also one of the most unusual looking deigns thus far fielded by the colonies. Despite its aggressive look, the Baldain class has proven popular with both pirates and corporation alike.

First launched in 2245, the Baldains were known for their power, well above the norm for most class I light vessels of the time. Built around a single OWB-1 warp coil and plasma chamber, the Baldain was not an overly fast vessel, with a top speed barely beyond Warp 5. However, the small vessels could maintain this speed for month on end if necessary, and would jump to Warp 7 quickly. But the Baldain’s main draw was it’s heavy OD-1 disruptors. Unlike most light craft, the Baldain had starship grade main weapons mounted in two massive cannons on the side of the ship. This allowed the small craft the ability to work in concert to threaten capital ships when necessary. Even the main hull was reinforced to allow the ships to take grazing blows from enemy vessels and still remain active.

The interior layout of the craft was cramped, but comfortable. The Baldain is technically a one-man vessel, but does provide for three additional sleeping berths as well as a tiny but comfortable recreation facility. As was intended, most Baldains were purchased in small squadrons of 3 to 5 ships by corporate and less-than-honest entities alike. The Baldain’s ability to harass capital ships would continue to make it a prime seller for nearly 20 years before the venerable fighters were upgraded. The addition of the Mk Ia high capacity computer did allow the upgrade of the main weapons to OD-2’s, giving the small craft a far better stand-off capability. None the less, the A-2 would be the last major production model, with active sales of the craft ending in 2275. It is estimated that over 450 A-1 and A-2 models have been built. Gathered intelligence indicated that a very wide range of customers have purchased the Baldain. No exact numbers exist on the total vessels lost, but best estimates place the total losses at 30 A-1 models and 10 A-2 models. Star Fleet currently has 3 A-1 and 2 A-2 models in its possession. Unconfirmed reports indicate that the Klingons may also have a small number of these craft in their possession. It is interesting to note that a majority of those Baldains confirmed lost were destroyed as a result of the Matieve Colonial conflict.