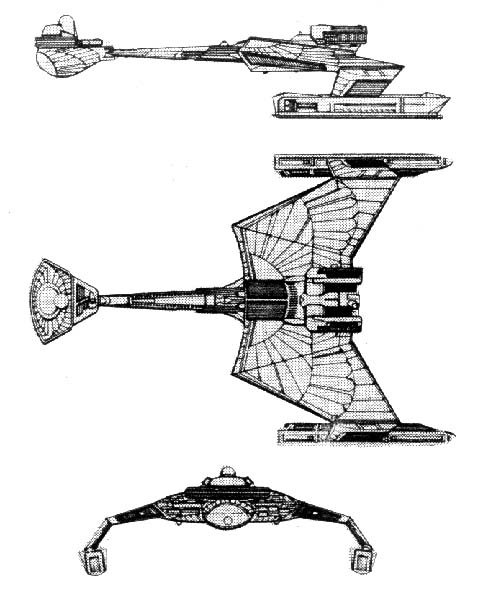 NOTES:
Because of the Romulan-Klingon technological exchange treaties, the Klingons agreed to exchange their D-7A Class cruisers for Romulan plasma weapons and several old-style cloaking devices. These vessels, delivered Stardate 2/09, 2/12, and 2/17 became the V-11 Class.

The 80 vessels in the initial shipment were stripped of their weapons, but the Klingon engines were retained to form the Type-1. The 42 in the second shipment were delivered without engines, shields, or weapons; these were fitted as the Type-2 with a plasma weapon and more efficient shielding. The 50 vessels in the final shipment also were delivered completely stripped, and these were fitted as the Type-5, with fore and aft-mounted photon torpedoes reminiscent of the Klingon D-7M Class. Types-3 and 4 are modified Type-1s.

Although 172 of these ships have entered Romulan service, they are not liked by their commanders or crews, many of whom consider them to be enemy vessels. In recent years, the Romulans have begun deploying many of the approximately 160 remaining in active service along the Klingon borders in direct violation of the signed accords. The class is named for the vas’kalabam (bird of storms), a small, flying predator of Remus. These nocturnal avians are often seen gliding on the rising winds before a storm and it is said they are capable of traveling hundreds of miles in the vanguard of a storm.