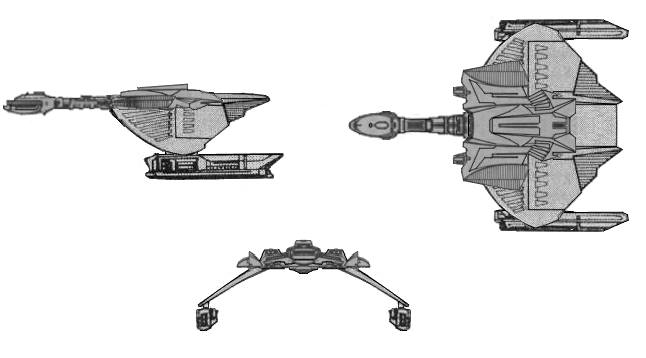 NOTES:
The Romulan R-7 was originally designed as a much smaller vessel. However, the design was significantly scaled up in early 2276 to respond to the increased number of Klingon warships fighting along the shared Romulan-Klingon border.
Designers reoriented the R-7 from a simple convoy escort to a far more dangerous heavy Destroyer-Escort. The design would go on to become on of the most powerful and dangerous Class VII ships in the Romulan inventory.
The Type-1 incorporated a number of well established components and was armed with the powerful RB-9 disruptors as well as a two torpedo launcher. The Type-1 was maneuverable and well loved by their crews.
Long range scans indicate that this vessel is used along all known Romulan trade routes. It has also been seen escorting convoys along the Triangle and Gorn borders.
Production of the Type-1 is believed to be at 5 or more hulls per year. Although this number is considered low for an escort, the R-7’s significant firepower and larger size may account for this reduced production number. Over 60 have been fielded; one is known to have been destroyed in an engagement with Klingon forces. A second is reported destroyed after a battle with Orion pirates in the Triangle.
Rumors indicate that a Type-2 is under construction. Details and capabilities of this variant are currently unknown, however – with several new technologies on the verge of being incorporated into the Romulan fleet, Federation officials are worried that the new version may become far more dangerous than the current mode.