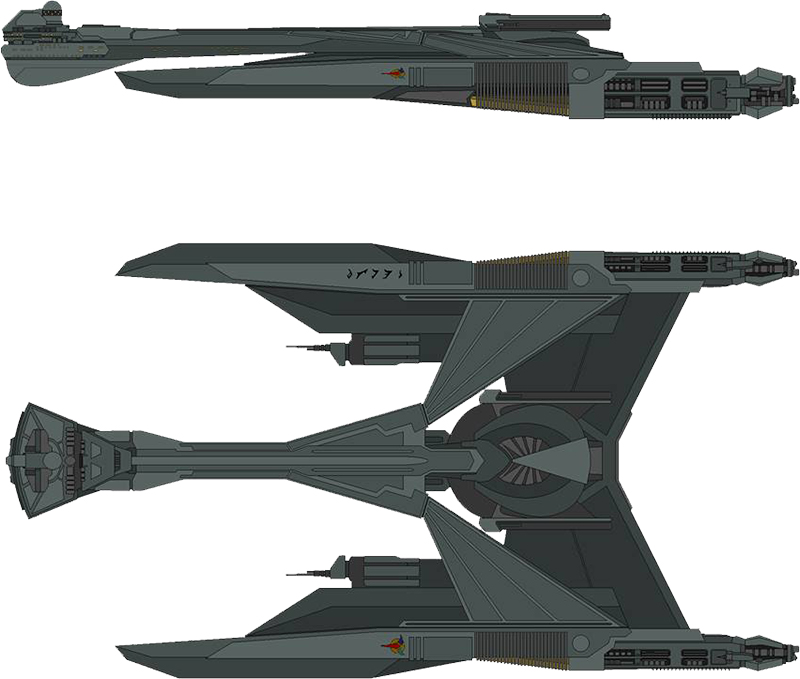 NOTES:
One of the most powerful, dangerous and compelling Klingon designs, the D-55 would go on to influence countless designs throughout the Empire while remaining strikingly different from any other known combat vessel in the Empire. Like many other Klingon vessels, the D-55 was built for intimidating ascetics as for practicality. Two large jutting “pods” on both sides of the craft housed full combat detachments, including barracks, medical wards and training facilities. Unlike other Klingon battle-cruisers, the D-55 did not store it’s marine detachments in hypothermia pods, but kept them active and training during even long missions. While many pointed out that this reduced the overall range of the D-55, others argued it was far better for morale and overall efficiency.

Most notable on the D-55 was the used of various beam weapons. While some other designs also used multiple disruptor types, the practice was not popular, despite the flexibility offered. Using these designs meant that a number of additional non-interchangeable components had to be stored. This further reduced cargo capacity dedicated to the crew, but gave the D-55 more capability than other large cruiser designs.

The D-55A was lunched in early 2249 to much fanfare. It was without a doubt one of the most powerful combat platforms fielded by the empire, and was quickly adopted as the flagship of several of the major Klingon houses. The A model included the capable KD-6 as it’s main weapons, with several KD-5 used as shorter ranged weapon system. The powerful, but short ranged KD-7 was also used to give the D-55 unparalleled combat firepower. However, the unreliable second-generation KP-1 was also installed. While the added firepower was more than welcome, the unreliability of this version of the KP-1 frustrate numerous field commanders on more than one occasion.

The D-55B would be the first model encountered by Star Fleet and was considered by many in the high council to be far too resource intensive to produce. Like nearly every other design of the day, the D-55 was forced to compete with the near monopoly of House Drell in the ship production arena. The D-55 was nearly twice the cost of the more popular D-7, which maintained a massive production schedule unparalleled in Klingon history. The ‘B’ model fielded an improved torpedo system using the newly revamped KP-2 torpedo which had proven far more powerful than the lighter KP-1. This new version of the KP-2 proved far more reliable, with fewer misfires or course deviations when compared to the older model. Both the A and B models would see action in the Four-Years War with each model proving it’s worth in battle.

Following the unsuccessful conclusion of the war, planners were forced to cut construction budgets and reduce the number of new-build hulls. Within three year of the war’s end, the D-55A was no longer in production, with the fate of older hulls uncertain. Production continued on the D-55B even as designers attempted to create a more powerful ‘C’ version. Both D-55C’s had constant engineering and maneuvering difficulties, with sub-warp combat operations often resulting in damaged thrusters and computer overloads. The D-55C was never put into production and the decision was eventually made to convert all D-55A to B models.

The D-55D was finally launched in 2269. This model of the battle-cruiser was equipped with a far more efficient shield system as well as the more powerful KP-3 torpedo systems. While a capable combat platform, political infighting would prevent designers from bringing the D-55 to it’s full potential, and the D-55D was considered under-gunned for a ship of it’s size. The D-55 proved effective against the Romnulans and later the Cardassians as ongoing conflicts with those major governments continued. However, the destruction of Praxis would bring and end to main-line production of the D-55, with the final hull launched in 2295.

With production of most ships now halted, designers searched for way to improve existing hulls and maintain the large scale military fleet that had served the Klingon Empire so well. The D-55E improved the main impulse drive and installed the KSP shield system to give the vessel more power for weapons during combat. Designers were finally able to install the KD-8 disruptors requested by field commanders. The installation of a cloaking device also gave the vessel significant combat capability. Unfortunately, designers were unable to secure funding to improve the main warp drive, and the D-55E was considered under-powered for it mission.

By 2310, the D-55 was one of dozens of designs being considered for permanent retirement. It’s popularity kept it in service until 2316 when the newer G model was finally approved. The D-55G was a significant improvement over the older models, with designers finally able to change the KWE-3 for the older KWE-2. Many of the older KWE-2’s still retained the second generation warp coils, with some vessels having 40 year old systems still in use. Coupled with a much improved impulse drive, the D-55G saw the installation of the KPD-7 pulse distuptor system and well as the use of two KDC-1 disruptor cannons. Additional hull armor also gave the D-55G increased combat prowess. All active B, D and E models were eventually converted to the G model.

The final version was the D-55J, which would serve for 50 years before being retired. Using the Service Life Extension techniques borrowed from the Federation, most D-55’s had their structural components revitalized or replaced, allowing for the installation of a larger impulse drive and updated weapons, including the KP-11 torpedo. Along with an improved shielding system, these upgrades allowed the D-55J to remain in service through conflicts with the Cardassians, Romulans, Tzenkethi and Kinshya. During the short conflict with the Federation preceding the Dominion War, numerous D-55J’s saw action and fought valiantly. However, it was clear that the D-55 was not as potent as other front line heavy cruisers. While two new designs were put fourth, many in the High Council were well aware that upgrading the D-55, as well as many other older designs, would be costly and time consuming. Many felt that using these ships in secondary roles would prove more effective than retooling them for front line assaults. The D-55 became a heavy escort cruiser, providing support for scouting and ground operations. Surprisingly, many D-55’s saw extended combat operations in these roles, with nearly a dozen winning posthumous glory for their captain and crew.