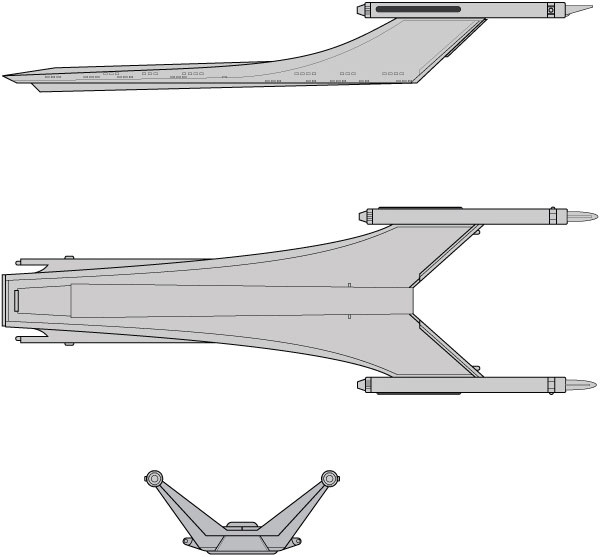 NOTES:
For a Class III-IV vessel, the Lightning seems exceptionally well-armed with its six distuptors, half of them mounted for forward fire. This is no ordinary merchant vessel-though, with it’s crew of only 23, it is also a paltry excuse for a pirate vessel.

The Lightning is a courier – a light, fast ship intended to carry small valuable cargoes, blasting out of its path any opposition it cannot outrun. Though it bears a superficial resemblance to many similar vessels of the Orions, the Lightning is more recent than the Wanderer, having been designed during the tumult of the Four Years War. Designed to pour it’s heart out in speed, this ships has shields so paltry and a hull so strong that it makes no difference whether shields are up or not. Many Orion captains put their trust in speed and live to tell how both dorsal were holed and still they got away.

Equipped with fail-safe navigation systems, permitting accurate guidance even if the main sensors are shot away, and crewed by diehards who get paid only if they live to deliver the goods, Lightnings are exceptionally good at getting where they are supposed to go.

The first variants to be sold publicly were in fact the lighter Class III versions of the popular craft. The primary power plant, the OWA-1 system, was paired with the inexpensive OIB-1. To counter a number of Federation restrictions, six OD-1’s were mounted to give the vessel good weapons coverage. However, the main weapon systems were specifically designed with a unique “upgrade” feature that allowed quick swap out with nearly any type of weapon system. This made the vessel very popular with many who wished to increase the overall firepower quickly and cheaply. Unfortunately, many soon learned that the shield system was so tightly fit and overtaxed that the vessel was good for little other than cargo delivery. This did not stop many a brave captain from attempting pirate activities. The prowess and legend of numerous pirate cartel captains was soon established, while the abysmal success rate of Lightnings as pirate vessels was quietly suppressed.

So successful was this “quieting” campaign, that in 2258, the A-2 was launched with much fanfare. Touted as a “true merchant Prince’s vessel”, the A-2 did little more than double the accuracy and range of the A-1. However, it was enough to cement the Lightning as the primary merchant and pirate vessel among the Orion. By year’s end, nearly two dozen orders were placed for the underwhelming yet sturdy courier.

Also by the end of 2258, the first real upgrade to the vessel was fielded. With no fanfare and built in secret, the B-1 model was far more dangerous than the A-1 or A-2. Heavy weapons and two torpedo’s gave the B-1 far more sting than it’s lighter cousin and made it an instant hit with pirates and merchants alike. The B-1 required significant retooling and design layout changes, however, driving up costs. Significant hull bracing increased survivability but reduced crew accommodation. None the less, the B-1’s ability to actually chase down fleeing freighters and disable them gave the B-1 a much more dangerous reputation.

The A-3, launched in 2259, was touted as a more combat capable ships for the more dangerous areas of the frontier. In reality, the A-3 was a direct answer to the B-1. The A-3 used the heavy OD-4 main disruptors in an attempt to create a weapon package that would deter attacks by other pirates. While the port and starboard disruptors were removed to make room for the bulkier main weapons, the efficient OSF was also installed, freeing up main power for the weapons and maneuvering thrusters. While the shields could still not stand up to a direct attack from a Klingon or Federation destroyer or cruiser, the firepower did allow the A-3 to operate independently rather than in small packs.

The A-4, first sold in 2261, was the only known attempt to upgrade the A-1 and A-2’s. Doubling up crew quarters allowed the installation of a medium OP-1 torpedo – a copy of the FP-1. While there was still not enough room to increase the shield system, space was found for the needed computer and the A-4 became the first (and only) standardized refit for older Lightnings. To date, it is suspected that anywhere from 70 to 100 A-1’s and A-2’s have returned to Orion shipyards and been refit. Of course a number of these received numerous other upgrades. None the less, the A-4 is now considered the most common of the Class III versions of the Lightning.

The A-5 would be the last of the lighter versions openly sold. The A-5 would see a minor increase in the impulse drive and a minor improvement to the shield system. This would be just enough to give the A-5 an edge over other light merchant vessels and the design eventually replaced the A-4 in production lines. By 2276, production of the Class III Lightning had ended, although it is suspected that several other models have been produced in small numbers at secret production facilities.