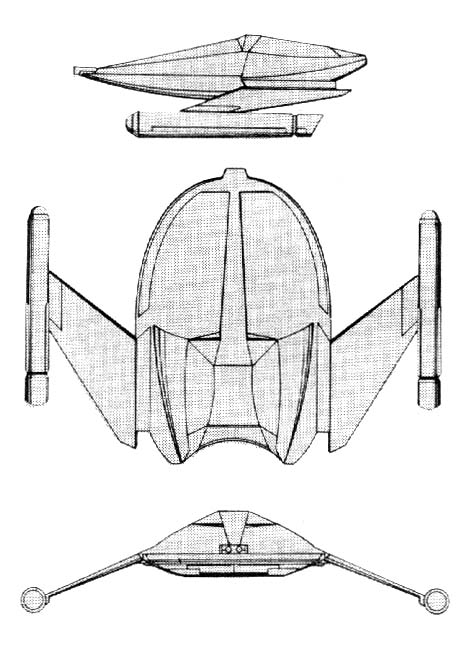 NOTES:
ntroduced about Stardate 1/8905 and assigned as groups to various fleets in the Romulan navy, the T-2s were designed for escort and patrol duties. Though they had no room to spare for leisure, and though the quarters and work areas were quite cramped, the class is considered to be roomy and comfortable by early standards.

After Stardate 1/9902, vessels appeared in which the hull had been modified to hold a plasma weapon. After Stardate 2/0001, the first Type 3s appeared, with increased length, weight, and crew complement. The firepower of the new type was more than double its original configuration, and the newer shields gave a combat efficiency three times greater than the Type 1. After several years of service, the destroyers began undergoing minor changes to the hull configuration and interior layout, and, beginning with the Type 6, the weapons mountings were increased from four to six.

The Type 7, with this new weapons arrangement, a more powerful impulse engine, and more efficient shields, made its appearance about Stardate 2/0803. A cloaking device also was installed on the Type 7. Reports from the Klingons indicate these were useful in escort duties. Many times, Klingon long-range sensor scans of Romulan convoys would show few escort vessels, but actual contact would reveal five to ten T-2s materializing from nowhere, making the supposed easy Klingon victory and prize a mere dream.

Of the approximately 250 T-2s built, about 150 are in reserve fleets and another 20 are being used as training vessels. Only five of these ships have been sold to the civil sector, all of which operate in the the Triangle or along Federation borders; it is not known if any of these are armed.

The class is named from the Romulan vastagor lattam (death talon), a reference to the Mogari, a large carnivorous bird native to Romulus. These man-sized birds are reported to swoop down on their prey at speeds up to 120 mph and inflict fatal blows with their long talons.