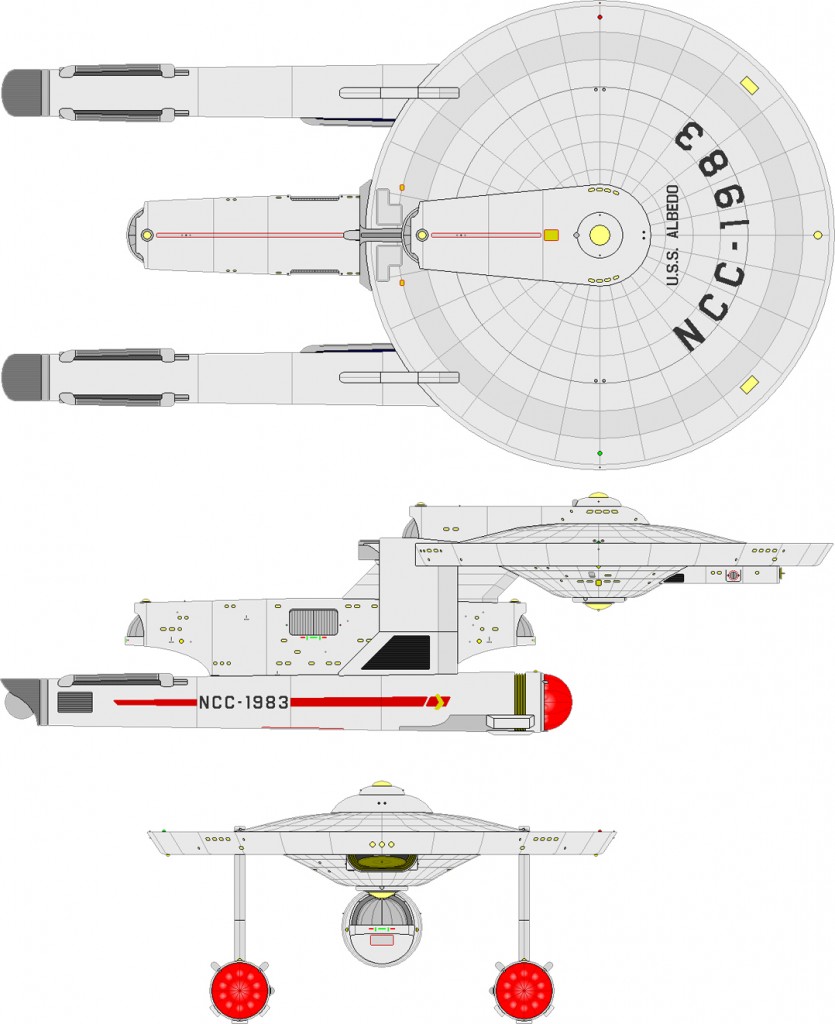 design by John Bandow, artwork by Johnathon B. Shade

NOTES:
In late 2246, Star Fleet requested the inclusion of a large scare through-deck carrier design that could transport and support two or more full wings of shuttles. Although Shuttlecarriers and through-deck cruiser were nothing new, it was hoped that the newly requested ships could reduce the reliance on other craft for support and produce a fully independent front line vessel.

By early 2247, the Albedo class had been selected for production. Designed around the FWD-1 power-plant, the Albedo could easily field over 40 shuttles and housed full repair and upgrade facilities on it’s hangar deck. A second fast-response hangar deck was also fitted to the design to allow several standard shuttles to remain on active stand-by during missions. By the time of the Albedo’s launch, it’s primary focus had already changed. Even as the Albedo finished her trial runs, the large hangar bays were being outfitted for combat operations, and the Albedo became a front-line military vessel in the ensuing Four-Years War.

The Mk I was somewhat under-powered for use during the conflict. While the FWD-1 power plant did allow the carrier to maintain high warp speeds for long periods of time, the vessel was under-powered for independent operations. The Mk I was fitted with six FL-1 lasers that gave the ship excellent weapons coverage. The addition of a FAC-2 also gave the Albedo a significant punch during conflict. But it was the carriers fighters, which could swarm an enemy vessel that made the Albedo a minorly successful design. None the less, the Albedo, like many vessels of the
era, was not designed for major overhauls.

In 2256, following the introduction of the phaser as the primary Federation beam weapon, the Mk II was proposed. With significantly greater firepower, the Mk II was though to be far more successful than it’s predecessor, which saw several losses during the war. But the Mk II’s subsystems were so integrated, that it was realized that further upgrades would require nearly a full ship rebuild. By 2264, the contract for 24 additional vessels was reduced to 8.

Despite it’s under-powered nature, the Albedo remained in service until 2269, when the last vessel was retired. Of the 24 hulls eventually produced, 9 Mk I’s were refit to Mk II variant. 5 Mk I’s were destroyed during the Four-Year’s War. 2 Mk I’s were scrapped. Of the 17 Mk II’s that were in service, 2 were destroyer, 1 was scrapped and 4 were disarmed and sold to Member states in the Federation. 10 are still in reserve fleet, although there are no plans to reactivate these ships. The Albedo was constructed at the Sol IV and Salazaar facilities.