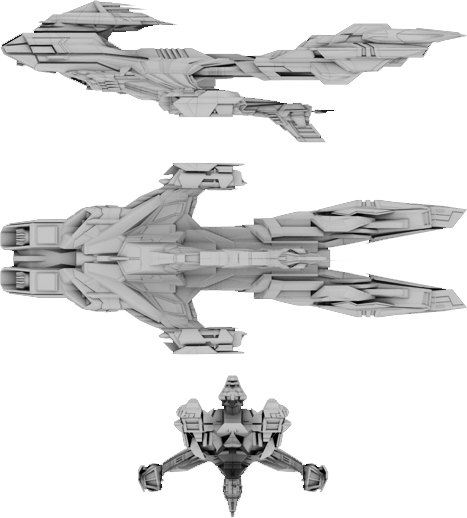 NOTES:
The Fujine is one of the few Orion designs paid for and built solely by dubi. Finished in 2264, the Fujine was designed to overwhelm other pirate vessels and capture the crew, rather than the cargo. Survivors would be given the choice of returning to their respective families or joining the growing space fleet. Of course those who chose to return to their families soon found themselves adrift in lifeboats, but the principal worked for a number of years.

Because few Orions would work with escaped dubi, the Fujine was actually built at New New Aberdeen yards. It featured a motley collection of components from the Federation, Klingons and even Nausicans. The main computer was a venerable but expensive M-2. Purchased second hand from a scrapped freighter, the M-2 was refurbished and became the center piece of the Fujine. Because of their stigma, the dubi backers of the Fujine were forced to use Naussican warp nacelles. Integration proved very difficult with the Federation computer, and the addition of a Klingon main shield only made the situation worse. But as with many Orion difficulties, the problems were overcome, and the final weapon selection was soon chosen.

The A-1 model was fitted with some of the most powerful disruptors available. OD-4 and OD-5’s gave the Fujine significant firepower, and made the vessel the focus of intelligence operatives from a number of governments. Only by adhering to its goal of targeting other known pirate vessels did the Fujine avoid being targets themselves. The first incarnation of the vessel remain in operation until 2269. After a significant battle caused serious damage to the Fujine, it was drydocked and eventually sold later that year to the Galmi family of Laldan.

The A-2 model saw the replacement of the damaged main computer, shields and impulse drive, all upgraded with Romulan equipment purchased at great expense. The Fujine became a major combat platform for the Galmi agricultural trade operation, and has since become the flagship of the Galmi family fleet.

While the Fujine is now nearly twenty years old, there are no indication that the vessel will be refit in the near future. Despite its enormous cost to maintain, the Fujine is still a force to reckon with in the OFMA.