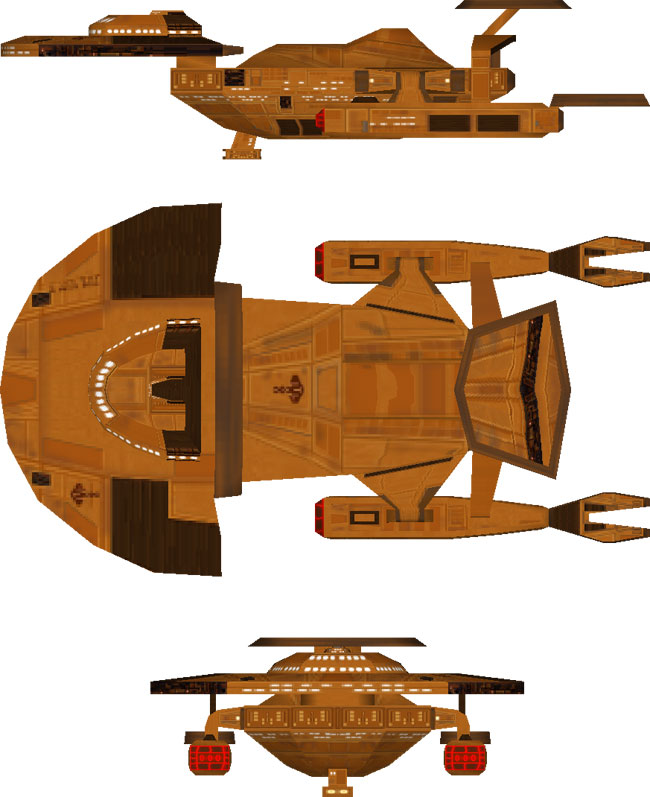 NOTES:
The Aladara class was once one of the most revered combat platforms in the Cardassian fleet. Although production of the Aladara was long done before direct hostilities with the Federation began, it is believed that the popular class would have bested most Federation destroyers of the period.

The design it self was typical of Cardassian ships, with a large forward hull housing the main warp coils. Two weapons pods were also fitted, leaving ample internal volume for crew support. The weapon pods also allowed quick refitting after prolonged combat. Coupled with the enlarged recreational facilities afforded to the main hull, the Aladar became a popular vessel among front line commander and crews alike.

The Type-1 was outfitted with the standard CWC-2 warp drive system, which allowed the vessel excellent power transfer to the maneuvering system and well balanced warp capability. The Aladar could maintain its standard warp speed for several days when needed and operate at emergency warp speed for over 20 hours before major warp coil degradation. The Type-1 also mounted a large impulse engine that gave the vessel excellent reserve power.

The Type-1 was most well known for it’s two large forward disruptors. These two heavy weapons could easily push through the strongest shields of the period and cause significant damage to all but the largest enemy vessel. Coupled with the twin torpedo launchers, the Aladar was a formidable opponent at close range. However, the Type-1 did suffer from several drawback common to Cardassian vessels. Like many Cardassian naval vessels, the wing-like warp structure reduced the effectiveness of the notoriously underwhelming Cardassian sensors. The main sensors were eventually placed in an external sensor housing mounted on the rear of the craft. A smaller crew also meant maintenance was often more rigorous longer on-duty shifts were not uncommon. Yet the vessels extensive recreation facility and roomy quarters remained the Aladar’s main draw for crew and officer alike.

The Type-1 saw extensive interaction with the Tallarians, Breen and eventually was a major player in the first war with the Klingons. The Type-1 was produced at the Manora, Monac and Tevak shipyards. Production reached a peak of 15 vessels per year before mainline production was eventually halted in 2292. Of the 203 built, 31 are currently in reserve fleets. 123 have been destroyed including 102 that were in reserve status at the Monac shipyard. 11 have been scrapped, nearly all damaged by combat. 4 are listed as missing, 30 have been sold over the years. Four additional vessels are listed as “in use under special circumstances” believed to be in service to the Obsidian order. Although a Type-2 was proposed in the mid-2230’s and again during the Dominion war, to date – no update or modification is currently known.