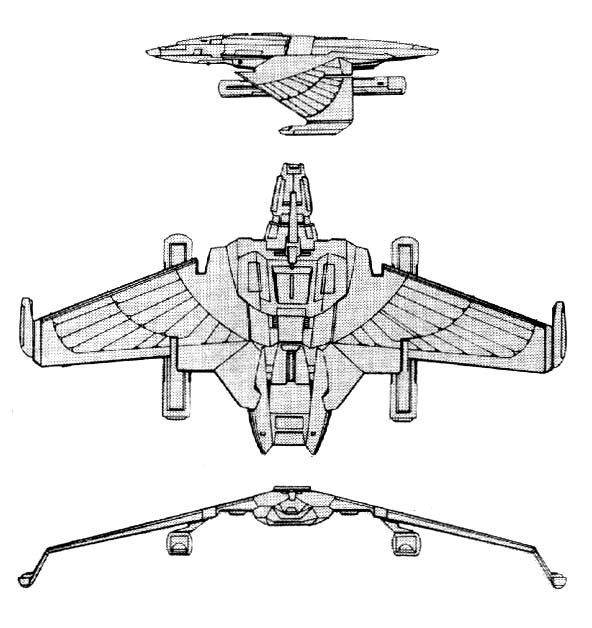 NOTES:
Like their counterparts in the V-6 Class, the V-7s were designed for multiple roles, with spacious interiors and complete onboard research facilities.

The Type-1 entered service in early 2269 and is still being produced as a support ship, even though it is not as efficient in combat as later models. Mounting the RPL-2 plasma weapon and a cloaking device, the Type-1 is capable of operating alone.

The Type-3, introduced in 2271, is the preferred model of the class. It mounts two additional disruptors and three photon torpedoes, and it has more efficient shields.

Of the approximately 80 V-7s built, nearly all remain in active service. Current production of the Whitewind is estimated at six per year.

The aft weaponry of the V-7s has set the standard for the Romulan Navy, as exemplified by this Project Grey Ghost report of an incident between two V-7s and two Klingon L-9 class frigates. The V-7s, investigating asteroid clusters, detected the Klingons as they approached. Both V-7s cloaked and deployed. As the unsuspecting Klingons began surveying the asteroids, the V-7s de-cloaked and opened fire, only to have the Klingons disappear from view and sensor, obviously taking advantage of cloaking capabilities acquired in the technological exchange. In the waiting game that followed, all four ships remained cloaked and invisible to sensors for several hours. Finally, one of the Klingon commanders became impatient and attempted to warp away from the area. Unfortunately, his path of departure resulted in a collision and catastrophic explosion. The remaining ships immediately de-cloaked, only to find themselves lying aft to aft, which put the Klingon at a disadvantage because of its lack of torpedoes to the rear. It suffered serious damage and surrendered to the Romulan commander, who allowed the Klingon to leave after surrendering the cloaking device.
The class is named for a meteorological disturbance peculiar to Remus. As described in The Eridam Papers, twice per Remus year, a hot wind blows across the northern hemisphere for as long as five days. Mineral particles from the western cliffs are borne aloft by the winds, and, at night, their phosphorescense causes the hemisphere-wide nightglow that gives the weather phenomenon its name aye mosaram (white wind).