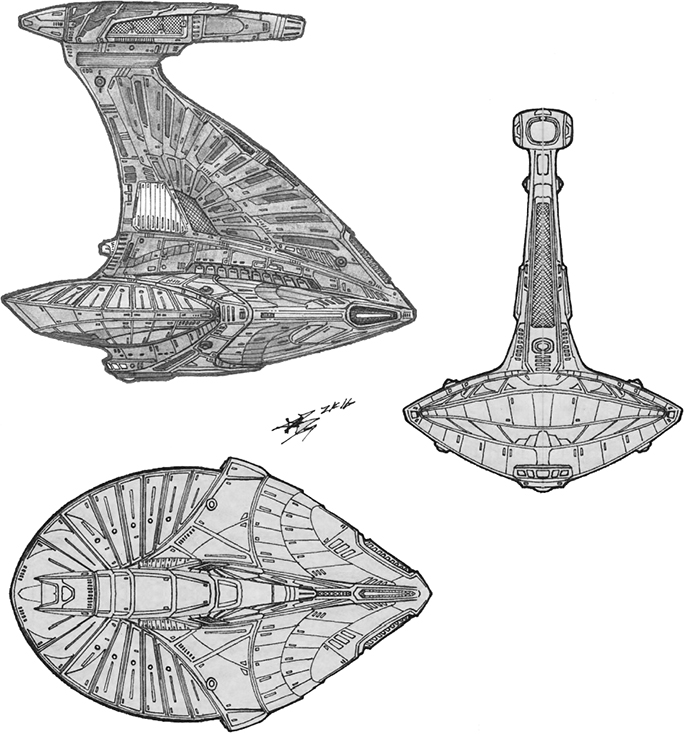 NOTES:
The Katar class is one of the heaviest monitor class vessels ever launched by the Romulans. Designed to operate in and around established colonies and bases, the Katar allows other destroyers and cruisers to operate farther into deep space while the Q-31 remains close in system. The Q-31 also supports a more significant payload of firepower than other in-system craft.

The Q-31 maintains its abilities by basing from a planetary outpost or deep space post while on station. Although warp capable, the Q-31 has a somewhat limited range, with most conducting patrols that are less than 35 days. The ships store do allow it to operate for up to a year on it’s own, but the Katar has no on-board refurbishment systems and must rely on a mother-ship or other resources when called upon to operate at greater distances. The Q-31 not only lacks a large cargo bay and replication equipment, but lacks an extensive entertainment or scientific base, with only a single rudimentary lab on-board. However, the trade off is well loved by crews as even the lowliest Uhlan has his own sizable quarters on-board. This has made the Q-31 extremely popular with those assigned to them, with many continuing on for years with a particular vessel.

The Type-1 was not know to Star Fleet until well into the 2350’s, but was actually in service in the late 2330’s. While many of the on-board systems were 2nd and 3rd generation versions of established standard equipment, the Q-31 did sport the new RWL-1. Like other newer Romulan vessels, the RWL-1 power system utilized a gravity well drive to produce the needed plasma, rather than the more traditional anti-matter system used by most space faring races. This meant the Q-31, like other Romulan vessels, would use simple Deuterium to produce the energy needed without the need to extensive anit-matter storage facilities.

The Type-1 also mounted an impressive array of disruptors located to cover nearly every conceivable attack profile. Coupled with the powerful RPL-4, the Q-31 was easily a match for most destroyers and medium craft that it came up against. In an unusual move, the Q-31 sports three separate impulse engines, giving the Q-31 excellent redundancy and continued power even after taking heavy damage. With the main warp nacelle mounted so far from the Impulse Engines, there was little interference from any of the impulse drives during warp flight.
140 Type-1’s were eventually fielded. Of those, 13 were destroyed, 9 were scrapped, 10 are still used as training vessels and 30 are in reserve fleets.

The Type-2 was launched in 2348, with and update to the primary beam weapon and an increase in shield power. The Type-2 saw extensive action in the Triangle, where it often faced off against Klingon raiders. A total of 154 Type-2’s were fielded, including 76 new hulls and 78 refit Type-1’s. Of those, 4 are listed as missing, 21 have been destroyed, 17 have been scrapped and 20 are listed in reserve fleets.

The most powerful variant was the Type-3, launched in late 2355. An increase in the warp drive to the RWL-2 power plant as well as the enlargement of the three impulse drives gave the Type-3 incredible power when compared to other ships in it’s class. The Type-3 was also the last production variant of the Q-31, and has remained in service for nearly 50 years.

105 new ships and 92 converted Type-2’s have been commissioned. 165 remain in active service, 1 is listed as missing, 18 have been destroyed, 11 have been scrapped and 2 were listed as captured during the Dominion War.